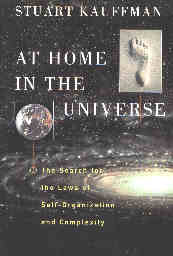 
The book starts with, "We live in a world of stunning biological complexity." By the end of the book we become aware that the concept of "stunning complexity" applies equally well to other systems of the world, from kindergarten classes to nuclear power plants. Kauffman leads us through the throes of imagining huge multi-dimensional spaces to the shimmering "view of evolution as a marriage of spontaneous order and natural selection." He stretches Darwin's theory of "survival of the fittest" till it includes "survival of the order prone", so that instead of homo improbable, we can be seen as homo expected. This is the book in a nutshell.

Nutshells cover up more than they reveal, however, and to assimilate the meat of the matter, the book must be carefully and thoughtfully devoured. Only then can one accept Kauffman's conclusion as a natural result of his biologically based metaphors.

One must wade through a quagmire of autocatalytic sets and navigate across a sea of blinking red and green lights before one reaches the shoreline with the billboard that proclaims, "the reason complex systems exist on, or in the ordered regime near, the edge of chaos is because evolution takes them." He examines the presence of spontaneous order in chemical and biological systems and pronounces them agents or controlling elements of the spontaneous order that moves systems into the border realm of chaos where life exists.

On page 130 he asks what if local ecosystems are on the edge of chaos, in the sub-critical/supra-critical realm "while the biosphere as a whole is supra-critical?" Then we might expect that the human species is ready to evolve from homo sapiens (man the wise) into homo astra (man the star seeder). Someone suggested the possibility of a global minimum wage the other day. My response was that would be the best incentive to date to promote the building of factories in outer space, where they would have to go to be free from the thrall of coercion. Those factories would be the first stage of humankind's becoming a settler of the stars. Sic itur ad astra.

In Chapter 11, In Search of Excellence Kauffman introduces the concept of simulated annealing to provide excellent solutions to the astronomically complex Traveling Salesman problem. Through this blacksmith metaphor we come to understand the concept of the "temperature of the company." Temperature is a measure of how fast the molecules of a macroscopic object move. The faster they move, the more likely they are to escape some non-optimal local minimum. Cooler companies have less research and development than hot ones, and have a very comprehensive policy manual. Hot companies are fueled by R&D and policy manuals are a bother they don't have time for.

Several years ago Toyota sent out memos to some seventeen of their automobile plants that they were to implement their own policies with an eye to optimization of their assembly lines. These seventeen solutions, some good, some bad, represent a patches solution (another Kauffman metaphor) to the problem of finding a global minimum energy (or maximum profit) solution to their business.

Kauffman says that "the detailed locations of local minima will shift" when some major external condition occurs. In the 1970's the Three Mile Island nuclear accident provided such an external shift for the nuclear power industry in the United States. The individual operating companies, already searching for their individual local minima, formed INPO, an organization devoted to self-inspection, self-regulation, and self-optimization, thus connecting up the patches so that salutary efforts in one company could seed similar improvements in other companies and all would benefit. The operating companies decided to heed Ben Franklin's injunction to "hang together." In the nineties a global version of INPO, called WANO, provides a global patches network. The necessity for such a global network came home to me when three days after the Chernobyl accident in Russia we picked up increased Iodine activity in our sump monitors in a nuclear plant outside New Orleans after a rainstorm. It is a small planet we live on and we make it weaker and more fragile by our neglect and stronger and more robust by our organizing and networking with like entities.

I found this book both inspiring and awe-inspiring. On page 189 I was inspired to write the following poem:

"We, the expected,
We, at home in the universe,"
Are robust beings
on a robust planet,
We are
FRAGILE NO MORE!

Thank God
we are
FRAGILE NO MORE!