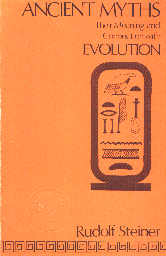 Ancient Myths
by
Rudolf Steiner
Their Meaning and Connection with Evolution
Seven Lectures in Dornach in Jan. 1918

In this book Steiner makes clear how the evolution of mankind proceeded in step with the devolution of the gods. In the childhood of humanity, man was like a child of today, who perceives things directly without the mediation of explanatory concepts or rational thought. They also perceive imaginary playmates that we adults have no clue about, up until now. In mankind's childhood man perceived himself as an integral part of the cosmic polis with no separate individuality as we know it today. His only ego was a collective ego of the cosmos, the heavens, and the gods with which he felt a oneness and reality. Like a baby, when it grows up, the soft spot in the crown of its skull hardens, so, too, did man's head ossify. With each increase in hardening of the head, the functions of the gods devolved to mankind and the individual ego of man evolved.

More and more man was thrown on his own individual resources to understand and explain the world by sifting it through the sieve of logical and rational thought, the evolving capability fully contained within man's head. Less and less did he behold the universe directly. During the Greco-Latin period, just when man lost complete touch with his gods and his cosmic reality, the heavens sent the Christ to earth: "they sent down their greatest Messenger precisely at that time so that man can find on earth what he formerly received from heaven -- the Christ." Christ's coming to earth may be seen as the final devolution of the gods -- the final throwing of authority upon the individual. Christ made it clear many times that He came not to be their Sovereign on earth, but to proclaim the individual Sovereignty of every man.

The myth of Isis, Osiris, and Typhon is the primary one that Steiner covers in this book. Osiris was killed by his brother Typhon and his wife Isis searched for his body, and finding it chopped into fourteen pieces in Byblos, Phoenicia, returned it to Egypt where she pieced the body back together to give it the appearance of Osiris. Steiner shows how the Osiris picture-script (origin of the Egyptian hieroglyphic writing) was replaced Typhon's letter-script (origin of our alphabetic script which the Phoenicians invented), thus illuminating the meaning of the story of Osiris's death. The whole of a body (picture) is chopped into fourteen pieces (26 in English today) and by careful reconstruction the appearance of the body is created. The Osiris myth chronicles the evolution of man as he progressed from using a picture-script language to using a letter-script language, and the concomitant evolution from direct, all-at-once perception of the cosmos to the mirror reflection of the cosmos created by the pieced together, linear construction of rational, analytic, abstract thought.

Modern man has become like Till Eulenspiegel, whose name means "owl in the mirror." Till wandered through medieval Europe playing merry pranks on dignitaries of all levels of society by interpreting their words and command literally. ( e. g., "Bring me a doctor." Till fetched a history professor.) He poked fun at the words we used to govern our lives, reminding us that we were only talking to our image in the mirror. Would you talk to an image in the mirror and expect it to actually talk back to you? No, you wouldn't Till might say, but you invest the abstract concepts embodied in your words with reality, when, they, in essence, are nothing but foggy images in a mirror in your mind.

There is much more reality to behold in this book that I can convey in a short review, but I cannot leave without expressing another major insight of Steiner's which deflates the rampant youth culture of our times. He says that man must begin to learn to grow old. It is only then that man will come to know that "the world is riddle and man is the solution," and thereby become capable of lifting the veil of Isis. In the words of the popular song, "Grow old with me, the best is yet to come."