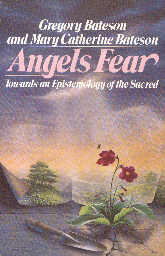 Angels Fear by Gregory and Mary Catherine Bateson
Towards an Epistemology of the Sacred
Published by Wesleyan Univ. Press in 1979
Book Review by Bobby Matherne ©2002

Every bit as "Unforgettable" as the reprise of her dad's song that Natalie Cole did with her father Nat King Cole is this joint book of MCB and her dad Gregory, as she calls him in the book. "You're a remarkably persistent shade, you know. Sometimes I wish you were properly dead," MCB tells Gregory in the last chapter (the seventh of her metalogues). "You never gave me any good lines," she laments early in the book about Gregory's earlier Metalogues in Steps to an Ecology of Mind. She was obviously a lot younger then and asks (and answers) much better questions in these Metalogues by her own hand.

This book is as thought-provoking as only a Bateson and a Mead-Bateson (MCB) can fashion one. Examples of key thoughts:

What is a number that a man may know it: and what is a man that he may know a number? (Warren McColloch's famous double question and Gregory's favorite quotation)

There once was a man who asked his advanced computer, "Do you compute that you will ever be able to think like a human being?" The computer thought and thought and finally said, "That reminds me of a story. . ."

"And I blessed them unaware." (MCB points out how the Ancient Mariner's blessing unaware the water snakes led to the Albatross falling from his neck into the sea and to the onset of life-giving rainfall.)

. . .noncommunication of certain sorts is needed if we are to maintain the "sacred."

The larger patterns [of nature] must always be carried in the form of detailed instructions to the components parts.

. . .Samuel Butler's wisecrack that if the headache preceded the joys of intoxication instead of following them, then alcoholism would be a virtue, and highly disciplined mystics would cultivate it. . .

A major insight came to me from the sentence on page 192, ". . . love is based on metaphor, a three-way metaphor that links self and other and also self plus other . . ." -- what I realized was this: the nature of the Holy Trinity is that the "three persons in one God" are 1) self (God the Father), 2) other (God the Son), and 3) self-other (God the Holy Spirit -- the self-other relationship). Only weeks later, reading Danah Zohar's The Quantum Self, did I discover that Plato wrote of a similar insight in the Timaeus and Symposium. (See ARJ's Metaphysics of Virtual Reality by Michael Heim.)