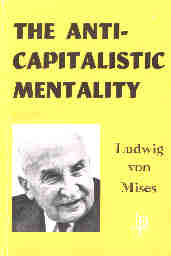 Ever notice that businessmen, particularly heads of large companies, are depicted in Hollywood movies as greedy, selfish tyrants? That is an example of what Von Mises calls The Anti-Capitalistic Mentality. He explores the roots of the social phenomenon by which "Capitalism" is attached " . . . exclusively to things abominable, never to those of which everyone approves." After reading Von Mises' chapter on the Social Characteristics of Capitalism one no longer has any questions about why Hollywood was a hotbed of Communist activity during the 1950's.

Capitalism works. Pure and simple. So simple that the Halls of Academe have no use for it, either, as a form of economic theory or as a philosophy of life. As Von Mises put it: "Its heuristic simplicity is viewed with suspicion . . ."

The fact that it works better than any other system is glossed over or merely ignored. Writers, such as Ayn Rand, who extol its virtues, are seldom assigned to college students to read. Instead they are assigned anti-capitalistic texts in social planning, government intervention, and other progressive programs for humankind. Von Mises says that, for writers of these texts, it would be ". . . a hopeless venture to attack freedom openly and to advocate unfeignedly a return to subjection and bondage." Instead they claim to be fighting for freedom and claim for themselves the name, "liberal." Von Mises carefully explains how "Socialism . . . is a means to disintegrate social cooperation and to bring about poverty and chaos." Why on earth would anyone attempt to do that to society? Von Mises' answer is that they are obsessed by "envy and hatred" of those who by dint of their having withheld a portion of their consumption to create capital, have prospered more than they have.

Have your dictionary ready as you read this book; Von Mises has a formidable vocabulary. At one point he referred to "varnishing days," which my OED says were days set aside by the Academy of Arts for their members to apply fresh coats of varnish to their pictures. Von Mises makes it clear that no amount of varnish can put a gloss over the evils of socialism nor make it as successful as capitalism in bringing happiness to the masses of humanity.