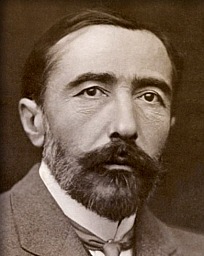 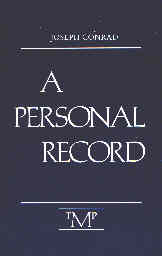 A READER'S JOURNAL, Volume 1
:
A Personal Record
by
Joseph Conrad
Published by The Marlboro Press, Vermont in 1982
Book Review by Bobby Matherne ©2002

To read a book by Joseph Conrad is to take oneself on a sea voyage with him. The equivalent of, as the French say, "une campagne de trois ans dans les mers du sud." You soon ignore the swaying of the cabin and the creaking of the timbers and hear only Conrad's voice as he talks deep inside your head.

"Don't talk to me of Archimedes' lever. He was an absent-minded person with a mathematical imagination. Mathematics commands all my respect, but I have no use for engines. Give me the right word and the right accent and I will move the world." This is one sample of his words, and here's another, "Most of the working truths on this earth are humble, not heroic truths."

For three years "Almayer's Folly," Conrad's first book wandered the sea lanes of the world with him, till at last it found a publisher. The day that it was published Conrad reckons as his birthday and comments in this book that he is a mere lad of 15 years old as he writes these personal thoughts.

Another favorite passage of mine is about Conrad meeting his mentor. "I tell you it was a memorable year! One does not meet such an Englishman twice in a lifetime. Was he in the mystic ordering of common events the ambassador of my future, sent out to turn the scale at a critical moment on the top of an Alpine pass, with the peaks of the Bernese Oberland for mute and solemn witnesses?" And further on . . . "As far as is possible for a boy whose power of expression is still unformed I opened the secret of my thought to him and he in return allowed me a glimpse into his mind and heart; the first glimpse of an inexhaustible and noble treasure of clear thought and warm feeling, which through life was to be mine to draw upon with a never-deceived love and confidence."

I have met such rare friends infrequently in my life and have treasured them dearly. Through his books, Joseph Conrad has become just such a friend.