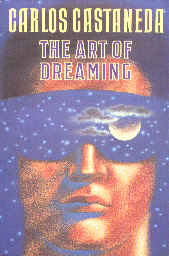 A READER'S JOURNAL, Volume 1
:
The Art of Dreaming
by
Carlos Castaneda
Published by Harper-Collins in 1993
Book Review by Bobby Matherne ©2002

In this book Carlos recapitulates the lessons of all his earlier books, subsuming the various techniques under the "position of the assemblage point." What he learned from Don Juan Matus in the early books that dealt with drug trips on mescaline and Jimpson Weed, he learns again as movements and shifts of his assemblage point. The variety of altered states of consciousness that Carlos was whiplashed into and out of so abruptly by Don Juan and Don Gennaro were the results of masterful manipulations of his assemblage point by these two trickster sorcerers.

Don Juan and friends had moved Carlos' assemblage point many times throughout the adventures chronicled by Carlos in his earlier books. They usually adjusted his assemblage point by striking him on the shoulder blades. Carlos would immediately enter an altered state and sometimes a completely different world. In this book Don Juan teaches his pupil how to move his own assemblage point for fun and profit . . . and terror. Terror is an ever present element in Don Juan's teaching forays with Carlos, and the reader is never sure whether the danger to Carlos was ever as real and life-threatening as Don Juan said it was. After all, Carlos does survive every one of them, and he is obviously convinced that the dangers to him are real.

The art of dreaming per Don Juan begins with seeing your hands in your dreams. This is usually the first step offered in any book on "lucid dreaming." In my first few efforts at following Don Juan's instruction, I did not notice my hands while I was dreaming, but a curious thing happened afterwards: in remembering my dreams, I saw my hands during the dreams.

The Art of Dreaming is the crowning achievement of the works of Carlos and a tour de force. It is the most important and intriguing of all his works because of the meta-light it sheds on all the others.