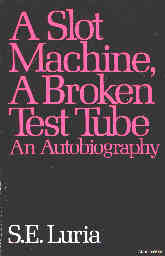 A Slot Machine, A Broken Test Tube
An Autobiography
by
S.E. Luria


What can one say about Salvador Luria: that he is a scientist's scientist (John Watson of DNA fame was his grad student); that he is a pinko socialist radical (regularly solicited donations for full page ads of 'concerned' scientists in the NY Times - his daily fare - and the Washington Post - delivered free to all of congress); that he once voted for a Republican (maybe more than once); that he never learned biochemistry (he got on with his physics knowledge he gleaned from Fermi and others); that he was a Nobel prize winner.

He discovered the process called "fluctuation" for understanding bacteriophage mutations (the slot machine reference of the title) and the process of "restriction" in viruses (the broken test tube). An amazing man, completely open to all possibilities in pursuit of science and closed to all possibilities but socialism (" a just distribution of wealth and opportunities for all") in the pursuit of humankind solutions.

He lived in Paris till the Germans entered it - he rode out towards Marseilles on a bicycle as bombs were exploding in the eastern section of Paris. A full recounting of his experiences en route would make good reading fare, I suspect. He said: in Paris men bought 5 or 6 newspapers a day so as to debate the essays of the various intellectuals in them. (When is the last time you read an intellectual in an American daily? Does Kilpatrick or Buckley qualify? Do we live in a backward country? I know teenagers who read both the Baton Rouge and New Orleans daily newspapers to compare sports writers comments on the latest or upcoming football game, but to read intellectuals? We seem to be heading towards a single nationwide daily, USA TODAY, and hellbent on stamping out all intellectual content by replacing it with the insipid intellectual tradition of Time, Newsweek, Look, and Life. The latter two, of course, no longer exist as weekly magazines.)

The section on the DNA code, the protein stop-start signaling process are worth the price of the book. How similar the molecular machinery parallels the human machinery of communication and production. The presence of a sugar for food strips off a protein and uncovers a code to start production of an enzyme to digest the food. Sounds like the U. S. welfare free food surplus distribution program.