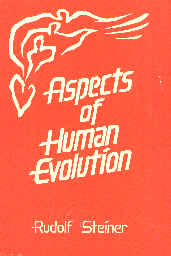 Aspects of Human Evolution
by
Rudolf Steiner
8 Lectures in Berlin, May -July 1917

Published by Anthroposophic Press in 1987


In these lectures Steiner focused on the age of mankind as it has changed in historical times from 56 years old in the first post-Atlantean epoch to 27 years old in this, the fifth post-Atlantean epoch. What Steiner means by "age of mankind" is this: during childhood the spiritual side of an individual grows naturally in pace with the physical side. In the ancient Indian culture of the first post-Atlantean epoch this synchronous development continued up to the age of 56. This ensured that elders of the culture had developed spiritually and thus were automatically looked to for guidance and wisdom.

Another mystery of Steiner's is that what we work on in this life becomes the seed of our next incarnation. Thus Steiner hints at the morphogenetic fields of Rupert Sheldrake: fields that are non-physical but that surround physical bodies and help to perpetuate their acquired characteristics.

At other points in Steiner's lectures he hints at the distinction of map and territory a full decade before Alfred Korzybski. He also indicates the value of channeling, a phenomenon that Seth, Lazarus, and Ramatha were going to make a household word in the 80's. Grounded in the nineteen century and growing into flower in the twentieth century, Steiner's ideas will scatter their seeds into the coming incarnations of the 21st century.