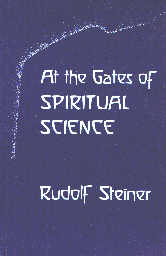 A READER'S JOURNAL, Vol. 1
:
At the Gates of Spiritual Science, GA#95
by
Rudolf Steiner
14 Lectures in Stuttgart in 1906
Published by Anthroposophic Press in 1986

NOTE: A more detailed review of this book with the new title Founding a Science of the Spirit is available.

The essence of spiritual science is the knowledge of humankind or anthropo-sophy. Thus we stand with Steiner at the gate of that knowledge and look and listen as he points out the wonders within and tells us how to achieve such knowledge for ourselves. When someone, driven by irrational impulses, finally discovers a reason for his actions, he comes to understand his actions and to be at peace with himself. Steiner points out that such impulses derive from the etheric body, so that one can understand all impulses as directions from one's unconscious etheric body, and be at peace with the unfolding of one's own cosmic plan.

Steiner claims, along with Goethe, that the eye is the creation of light and the brain is an extension of spinal marrow. When the presence of light is withdrawn from the eyes, as in animals in pitch black caves or deep undersea, the eyes atrophy and the vital energies formerly going to the eyes are directed elsewhere, to feeling or hearing. This much is known by science. (One might speculate that blindness results from the lack of use or need for light itself.) What Steiner adds in his spiritual science is the suggestion that the presence of information in the light spectrum is what caused the eyes to spawn in the first place. A significant point here, because if this is so, then we might anticipate new organs of perception forming in the near future to directly sense radio and television waves, relative newcomers to the electromagnetic spectrum.

The formation of the brain out of the spinal marrow during the course of human evolution Steiner likens to the story of Jonah and the whale. First Jonah existed outside of the whale, just as the soul first worked on the body from the outside. Jonah's entering the whale mirrors the process of the brain forming inside the body to further the work begun by the soul on the outside of the body. The biblical story of Jonah and the whale contains the story of the evolution of humankind's thinking function.

Steiner regards the plant as an inverted human. The root of the plant is its head and the plant stretches out its reproductive organs into the air. With a human, the head is on top and below are the reproductive organs, He points out that if you rotate a plant through 90 degrees you get the position of the animal (horizontal, on all fours), and if you rotate another 90 degrees, you get the position of the human species.

In these series of lectures compiled from notes made by a member of his audience Steiner lays out the evolution of humankind and the evolution of the earth in a comprehensive manner so striking that it makes the Darwinian "scientific approach" to evolution seem like a grade school term paper by comparison.

To Obtain your own Copy of a Newer Version of this Reviewed Book, Click on SteinerBooks Logo below.