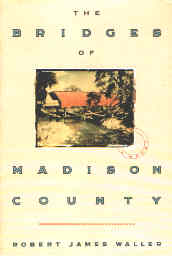 A READER'S JOURNAL, Volume 1
:
The Bridges of Madison County
by
Robert James Waller
Published by Warner Books in 1992
Book Review by Bobby Matherne ©2002

The movie will begin in Seattle with the Tacoma Nighthawk, an aging black jazz saxophone player, who hired Robert Kincaid to do publicity photos of him. He was impressed by the photos Kincaid produced and invited him to hear him play at his club. Kincaid showed up and requested that he play Autumn Leaves. After the set and over drinks, Nighthawk notices the name Francesca on a chain around Kincaid's neck and asks, "Anything special about that?"

"How much time do you have?" comes Kincaid's answer, the movie flashs back to the beginning of Waller's book. The story of the movie would then proceed as the book did. (Unfortunately, Hollywood's movie with Eastwood and Streep centered on whether Francesca's children would respect her wish to have her ashes scattered over the Roseman bridge. They set a beautiful love story inside of a soap opera frame.)

Kincaid was assigned to do a story for National Geographic and, as the current TV ads for NG say, "You never know where you'll end up." Kincaid certainly didn't when he stopped to ask the forty-ish farm wife, Francesca, directions to Roseman bridge. She drove him to the bridge and later invited him to dinner. He stayed for a full course and left behind his brand on her heart. And she on his.

How the two fell in love at first sight and made love for four days while Francesca's husband and two children were away at the Iowa State Fair forms the body of the book. A thin book, painfully thin -- so thin that by page 32, I was looking ahead and wishing that the book were 300, 600, or 900 pages long. But the story was just long enough for a short book and with long thrills. Twice near the end of the book I experienced a state of exquisite awe at the beauty of the story -- a continuous chill that lasted for 10, 20, or 30 seconds -- one that you don't want to end -- the kind that makes you take the phone off the hook so you won't be interrupted.

"For the peregrines" is the dedication -- for those lonely souls, those aliens not of this world, those wanderers like Robert or emigrants like Francesca that will never be at home until they meet each other, and then they never roam again.

"I am the highway, the peregrine, and all the sails that ever went to sea," Robert told her and she waited for his return till the end of time.

When he returned, well, that would be another story . . . and what might that story be called? There’s a hint of the title in the first sentence of this book:

[page vii] There are songs that come free from the blue-eyed grass, from the dust of a thousand country roads.