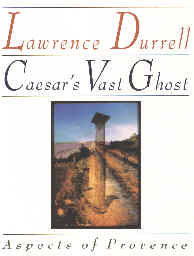 To read Durrell's book is to wander through Caesar's vast ghost, Provence, and to become intimately familiar with its many Roman aspects. He writes of Provence as though it were a 2,000 year old suburb of Rome where its retired generals and consuls moved to escape the hurl-burly of city life. To wander through Provence is to quaff it heady brew: wine, that ubiquitous concoction - whether it be of "poor contrivance" or a connoisseur's choice. One is ready to accept his friend Aldo's declaration that "everything really desirable has come about because of, or in spite of, wine!"

One stands in awe of the fabled aqueduct with the graceful arches, Pont du Gard, and is reminded once again of the Roman presence in Provence. As Durrell said, "It is obvious that the country is a funnel through which almost every race, ancient and modern, has marched either towards or away from, a war." A land of unlikely contrasts, where you can as easily find signs of bull worship as Buffalo Bill worship. Tombs of beloved poets beside tombs of their beloved pets. Great winds that rake the land named "mistral", of both atmospheric and poetic origin. Amphitheaters, ruins, relics, ancient coins and pottery shards greet you at every turn of the road or the shovel. From the fragile black past of Celtic ware to the golden Greek pottery light enough to float in water.

Like a great continental palimpsest of European cultures, Provence awaits your pleasure. Come early, leave late, and taste the abundant delights. And while you await passage to Provence, wherever you are, prop open this gorgeous book and imbibe large intoxicating draughts of its fragrant bouquet. In brilliant color and picturesque story, Caesar's vast ghost is proffered to be quaffed like a highly contrived dry red wine to stave off the prolonged drought before arrival on the sunny shores of the Rhone.