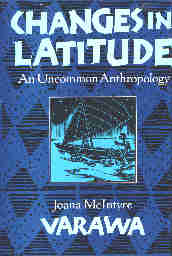 An anthropology of everyday life in the Fiji islands is the fare provided by this courageous woman from Los Angeles. Pulling up her roots in Hawaii on a whim, she moved to the Fiji islands, where a native man, Malé Varawa, asked her to marry him. After becoming part of his extended family for over a year, she finally married him.

What spices up this tale of marriage is the confluence of Joana's European culture and Malé's Fijian culture. Malé's father had urged his son to marry the "European", as all white foreigners are called in Fiji. She was considered a rich woman and his father bargained with her for an outboard motor and boat as part of the arrangement. Soon Joana began drinking yaqona, the local beverage of choice that performs a similar function to wine in the South of France and beer in the South of the USA. It is the universal beverage and anesthetizer against the travails of Fijian life.

Joana moved into a bure or grass hut with Malé on Vedrala, an island of their own, which had been in the Varawa family for generations. Malé's family soon became her family and she describes for us the circadian existence of herself in that family: the fishing on the reef with spears, the boat trips for firewood, the cutting of the brush for farming, the picking of breadfruit for supper, the weaving of the tapa mats for the floor of their bure, the ritual ceremonies of birth, marriage, and funerals, the ever-present drinking of the mildly intoxicating yaqona. She describes these, not as a cultural anthropologist observing the scene, but as an assimilated member of the family. Not as a temporary visitor for an anthropological study, but as a permanent way of life she had chosen for herself. We undergo with her the tough times when she tottered in her resolve and nearly moved back to civilization as she knew it before Fiji. Once she packed her stuff and dragged it alone to the water side only to find no boat or help to get her away from her island in the South Pacific.

If any of you has ever entertained the notion of giving up the stress of western civilization and moving to the carefree South Seas to find an abandoned island and live off the land and the sea, this is the book for you. Here's a story by someone who actually did it, and she writes about all the details of her experiences, wart hogs and all. Read this book and you may be ready to catch that next flight to Fiji by the time you're finished reading it. Ready to build your own bure, weave tapa mats to cover the dirt floor, read by the light of a kerosene lamp, eat fish and cassava, drink yaqona to numb your remembering of the places you left behind every night before you roll over on a grass mat to go to sleep. Or you may find yourself very thankful to slide between the cool sheets in a comfortable bed in a bug-free, air-conditioned bedroom when you go to sleep that night.

Joana McIntyre Varawa provides a Fiji vacation, an island paradise respite we can enjoy as her guest. We become the anthropologists as we visit and observe her daily life in paradise. Buy yourself a ticket by opening this book and you can experience changes in latitude as you begin reading.