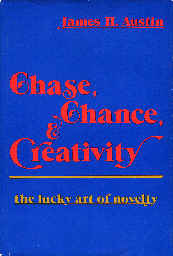 A great book on creativity by a prominent neurologist. He details his research paths in the tracking down of the etiology of MLD, GLD, and other dystrophy diseases. Particularly intriguing is how he was led into looking for neurological disorders in urine. He is at his best when he describes the typical branching off of research projects whenever an "un"-successful experiment is done. He injects a compound into a rat to create disease 'X' and gets a reaction which looks like disease 'Y' and this leads to his uncovering the etiology of disease 'Y'. The neurological and biochemical material, while appearing forbidding due to the diagrams of the book, are really easily approachable by the interested layman.

There is some useful material for my planned essay on the etiology of laughter and inspiration for a novel. (Working titles are: "Convulsions for Fun and Profit" and "The Mad Scientist and the Deaf Mute Artist.")

In the last few chapters there is abundant useful material on the benefits of meditation - but you will have to read about them to find out, meditation won't do it for you. Suggest you try meditating before you read it. How about listening to a comedy album before taking a test on creativity? Works great according to a study he cites. Austin's book is well footnoted and an entire appendix is devoted to credits: from his father to his MLD patients.

Austin is a gentle, caring scientist with a fondness for the chase. He credits Peter Rabbit for that love. He gave that name to real rabbits he chased and caught as a teenager. He includes a newspaper clipping of his own arrest as a mad man one day - he was released when he released the rabbit. No doubt both he and Peter Rabbit are still running today. As an adult he chased diseases to their warrens as assiduously as he chased Peter Rabbit and in his lifetime he's plunked many of them into his gunny sack of discoveries. James is probably still out there chasing a rabbit right now and, with the luck of chance, will catch one as you're reading this.