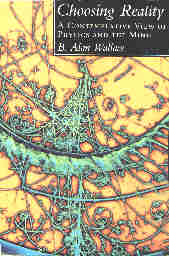 A READER'S JOURNAL, Volume 1
:
Choosing Reality by B. Alan Wallace
A Contemplative View of Physics and the Mind
Published by Shambala Pubs in 1989
Book Review by Bobby Matherne ©2002

"Are there contemplative techniques that can provide us with knowledge that can be integrated with our scientific view of the world?" In this question B. Alan Wallace lays out his primary goal for this book. He looks at and explains to us the scientific theories of ultimate reality and finds satisfaction in neither scientific realism nor in instrumentalism. Instead he carves out a middle way from the Buddhist view of the world.

Most of the book is devoted to describing the scientific view so that by recognizing the rose-colored nature of our scientific glasses, we may infer the reality that exists sans any glasses. He offers us Buddhist meditative techniques such as controlled breathing and sitting quietly as royal roads for the entrance into direct experience of reality. Choosing Reality for Wallace is equivalent to choosing Buddhism one surmises.

His quotes from pioneers of science are worth savoring:

Werner Heisenberg - "What we observe is not nature, but nature exposed to our method of questioning."

Peter Medawar - "The teacher has forgotten and the students will soon forget, that what they see conveys no information until they know beforehand what they are expected to see."

Darwin's crew on their famous voyage, when they encountered South Sea Islanders that had never seen a boat bigger than an outrigger canoe, asked the natives what they thought about their large ship. The natives looked directly at the ship and said, "What ship? That's just a funny looking seabird on the water!"

Edward Harrison - "The anthropic principle asserts that the universe is the way it is because of the way we are."

If this be so, then electrons exist because physicists look for them.

Francis Crick - "The ultimate aim of the modern movement in biology is to explain all biology in terms of chemistry and physics."

If the anthropic principle is true, then the reverse of this statement may also be true, i.e., all chemistry and physics may be explained in terms of biology.

B. Alan Wallace - "The most fundamental measuring device is the human mind, for without it nothing would be observed at all."

Thus does Wallace encourage each of us and his fellow scientists to improve the quality of their awareness and thereby bring the finest tool in their laboratories into calibration with reality.