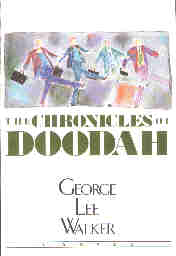 Walker's first novel begins like The Magic Christian with strange events happening to the hero of the book. A dog appears beside his desk and then disappears, pigeons fly out from behind the guard's station in the lobby, he sees a Japanese man standing behind his boss's desk, walks back to phone his boss who denies the presence of a Japanese visitor. An impromptu plane trip cross-country with the Chairman dumps our hero in Los Angeles without portfolio and ends up in a romp on the thickly carpeted floor of the local office with three curvaceous female employees. Unlike "Christian" there is no identifiable protagonist, at least at first. Slowly the reader suspects that the coordinating agent is the corporation itself. A large car company employs our reluctant hero as speechwriter for its Chairman and has selected him for greatness, but several minor problems block his way. He spends his time with his friend Conrad grousing about how bad the company is and joking about the meaninglessness of it all. The "Future is Tomorrow" speeches he is forced to write are pumped "full of sound and fury" and garnished with blasting rock videos and dancing girls. The endless writes and re-writes must be approved by Marketing, Legal, Finance, and probably even Janitorial services before the Chairman gets the speech. The rehearsals, re-rehearsals, theatrical gimmicks, and red, white, and blue bunting are more fitting for a grand opening than for a speech. All these trappings and folderol Conrad calls "doodah" and our hero heartily agrees - at first.

Then he visits Room 111, Troubled Employee Department, and his whole viewpoint changes. He is stretched on a rack, beaten with a whip, and tortured beyond endurance. He is yelled at, ridiculed, and cajoled into adopting company standards of socialization including bowling, auto repair, and sports talk. He learns correct posture and speech patterns. And he escapes from the torture regimen only to be confronted by offers he can't refuse: first, a promotion to the empyrean reaches of the thirty-second floor as Vice President, second, a million dollar bonus for a single job, and third, an assignment to dispose of Conrad, his former best friend, with "extreme prejudice."

With trepidation we follow our hero's passage from a disgruntled to a perfectly gruntled one.