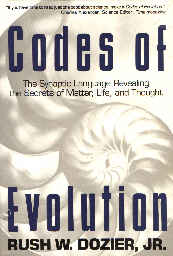 Codes of Evolution by Rush W. Dozier, Jr
The Synaptic Language Revealing the Secrets of Matter, Life, and Thought
Published by Crown Publishers in 1992
Book Review by Bobby Matherne ©2002

This book might be subtitled (in Dozier's words), "From the Big Bang to the Big Brain". In this synthesis of Darwinian evolution, Quantum Mechanics, and Neurology into what he calls "Unified Selection", Dozier offers us several clear and concise descriptions of key processes that words are often thrown at, to little effect but obfuscation, up until now.

Two Slit Experiment: On page 63 Dozier describes the double slit experiment of Quantum Mechanics. The experimental setup has a stream of electrons passing through two slits. When the back of each slit is illuminated by a laser beam, the detectors on the beam target record hits of single electrons that correspond to the photons excited by the electrons passing through the laser beam. The electron behave like particles. When we switch off the laser light, the detectors record an interference pattern which can only be produced if the electrons were behaving as waves. If we close the second slit and send one electron through the first slit, the electron hits the detector directly behind the first slit. If we open the second slit and send another electron, the electron will appear behind either the first slit or the second slit, with a probability that can be predicted by Quantum Mechanics. The spread of probabilities behind the two slits is the same as the interference pattern produced when a large number of electrons are sent through both slits. Electrons have a nature that transcends our ideas of waves and particles.

Genetics: On page 89, Dozier explains Mendel's genetics with a simple example: imagine breeding a Red dominant flowering plant (its genes can designated as R1R2, capital letter for dominant) with a white recessive plant (w1w2). Mendel showed that the results could be predicted by considering all possible combinations of the genes: R w1 , R1w2 , R2w1 , and R2w2 . Since all the progeny had dominant Red genes, all of the first generation would be Red flowering. Now, imagine breeding the first generation with each other(R1 w1 with R2 w2 ). The possible combinations are: R1R2 , R1w2 , w1R2 , and w1w2 . Thus in the second generation, one out of four plants will bear white flowers as a result of the recessive genes.

Process and Content: On page 172 Dozier describes two types of memory provided by the brain: procedural (know-how) memory and declarative (know-what) memory. These two types of memory are reflected in our language as process (procedural, know-how) and content (declarative, know-what) forms of meaning. Nouns are content words and verbs are process words. Nouns and verbs may have either process or content aspects. The noun date may refer to the process (what we did together) or the content (the person I did it with). The verb clown may refer to what your child is actually doing at this moment (process) or to what Red Skelton did on TV last night (content). The same thing happens (process) to the verb happen (content).

Pockets of Life: On page 208 Dozier describes a hypothetical deck of cards arranged with velcro strips so that they only stick to cards that are in a collated order ( I. e., the numerical order by suits, 2Hearts, 3Hearts, 4Hearts, etc.) The 3Hearts would only stick on one side to the 4Hearts and on the other to the 2Hearts. The author uses this thought experiment to explain his concept of unified selection. Shuffling such a sticky deck could lead to pockets of order that maintain coherence over successive shuffles. These pockets of order correspond to pockets of life building themselves up "as the universe shuffles its way to maximum entropy [ed note: entropy]".

Expanding Universe: On page 223 Dozier explains the link between the red shift of the galaxies and their distance from earth. Imagine a large balloon the size of an asteroid:

Drawn on the balloon's surface are three points labeled Milky Way, Galaxy 1, and Galaxy 2. The point labeled Milky Way is ten miles from Galaxy 1 and 100 miles from Galaxy 2. Now imagine that the balloon is inflating at a rate that doubles its size every hour. After an hour, Galaxy 1 will be twenty miles from the Milky Way and Galaxy 2 will be 200 miles away. Although the balloon is expanding at the same overall rate, the difference I distances between the points means that the speed of recession from the Milky Way of Galaxy 1 is ten miles per hour while the recession speed of Galaxy 2 is 100 miles per hour.

This book is an synthesis of many fields into one grand theory of unified selection. The codes that comprise the unified selection theory are: the quantum code, the genetic code, and the synaptic code. As you read this book you will be decoding for yourself the very codes that make it possible for you to be reading this book in the first place.