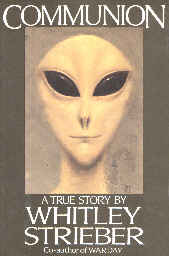 
When the author of a book as well-known as "Wolfen" (didn't they name a movie after him?) who is also an avowed disbeliever in UFO's writes a book on his actual experiences with "visitors," it merits the reader's careful attention.

The story begins near the end of a long series of strange occurrences at his family's cabin in an isolated wooded area around Albany, New York. Visitors appear in his bedroom in spite of his souped-up anti-intrusion devices, burglar alarms, and motion-sensitive lights. He stares at the room full of insect-like little people ( four and a half feet tall) in the glow of the lights from his fully operational, but un-tripped burglar alarm system. Needles get shoved into his nostrils (optic nerve, frontal lobe probes), triangular patches appear on his arm (several epidermal layers gone), various pin-pricks, balloons in the throat, and a rectal probe follow. Friendly but inquisitive folks, these visitors.

The strength of Strieber's book is in his detail of describing events, such as his extraction from his bed to the space ship. The reader gets to experience it exactly as Strieber did: "feeling stuck in a heavy tar and able to move very slowly with the greatest will-power." In such a state he reaches and finally clicks on a beside lamp only to discover the power is off - the next morning the oven clock is slow by five minutes, as though the power was only switched off during the time he tried to turn the light on.

A beautiful study in hypnosis because of the recurrent amnesias (lost time periods) that are common to the "visited." The appearance of screen memories is also common (the elks, the owl, the rabbit that one remembers in place of the visitors immediately after a visit). Anyone who even remotely suspects that they have met a "visitor" will be rewarded by this book in the form of the right question to ask themselves. The lead-off question should always be, "What is the strangest experience I have ever had?"