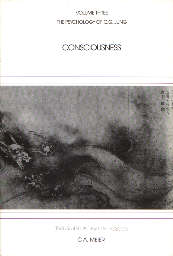 "The only proper textbooks ever written on Jungian psychology" is how Laurens van der Post describes this series of books by C. A. Meier, a close friend and associate of C. G. Jung.

Meier hits the readers with an "epistemological paradox" right off the bat, as if to scare off anyone intimidated by sesquipedalian words. In the physical science, he says, a scientist uses his psyche (or consciousness) to observe a physical process and then translates it into a intra-psychic process. In psychology, no such external point of view is available, because the process is within the observer and the observed. The psychological scientist is in the paradoxical position of viewing the contents of the psyche with the psyche and returning the results to the psyche.

From that start, Meier goes on to discuss the phenomenology, the structure, the localization, and the adaptive mechanisms of consciousness. Interesting heavy reading -- a comprehensive review of material I've encountered before. The payoff for me was when Meier began to cover the introverted/extraverted attitudes, and the four functions or types of consciousness.

His Seven Fundamental Laws in Chapter VIII are alone worth the price of the book. In one place he gives the seven laws that would allow one to completely understand Jung's typology. The laws are complete and cover each aspect of the typology. Here is a brief summary of the seven laws:

Law I: Four functions are required to fully apprehend a phenomenon: Thinking, Feeling, Sensate, and Intuitive.

Law II: The TF pair is rational, discriminating, or judging and the SI pair is irrational and perceiving.

Law III: The two functions of each pair mutually exclude or oppose one another. 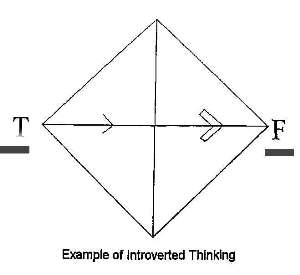 Law VI: Both the inferior function and its attitude are contaminated by the unconscious. (Operate mostly out of a person's awareness)

Law VII: "In the course of life there is usually a natural shift of emphasis among the functions, which ends up with a total reversal of the typological perspective."

How does Law VII operate? In western culture the typical male child will start out as Sensate in the womb and the first year of life, then will likely move to Thinking through his adult life, when, because of some mid-life crisis, he will cross over through Intuitive and end up with a differentiated Feeling function in his golden years.

In the typical western female example, the child will start as Sensate, will likely move to a nurturing Feeling type, and will cross over through Intuitive at mid-life, and develop a differentiated Thinking function in her golden years.

These are my broad generalizations for the purposes of illustrating Meier's seventh law, but they will likely be familiar to any American who has gone through a mid-life divorce. The male must learn to deal with his Feeling function effectively, or he will fare poorly in the re-mating game and end up alone in his golden years. The female must develop a differentiated Thinking function soon after a divorce in order to cope successfully with single parenting and possible re-marriage.

As for the perennial Sensates, they get hooked into sports, conditioning, or other physical activity and only the loss of physical function due to disease, old age, or accident will push them into movement towards differentiation of their Intuitive function. One can expect that they will follow the path of least resistance through their Auxiliary function.

The Intuitive grows up in a generally chaotic atmosphere as a child, and, in the absence of conditioned reinforcements to their Thinking function or Feeling function, learn to develop their Intuitive function and get by quite well on their excellent hunches.

Although the progression through the functions during a lifetime is typical, it is by no means unanimous, so that each of the four types will be found at all ages distributed through society. Individuated adults will exhibit characteristics of their former inferior functions and unindividuated adults will not have moved one whit. Such a person might be characterized by the statement, "He spent his entire life perfecting his faults."

This is a thumbnail of Jung's typology made possible by C. A. Meier's formulation of the seven fundamental laws that govern the attitudes and functions of consciousness. These laws are as important to the field of psychology and psychotherapy as Newton's three laws of motion are to the field of celestial mechanics.

1. In the example shown of an Introverted Thinking function, the solid arrow pointing to the center indicates the Introversion and its location on the Thinking line indicates the type of the superior or differentiated function. The open face arrow points to the periphery of the diamond and indicates Extraversion of the Feeling Function (open face F).
Return to text below footnote.