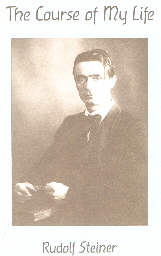 The Course of My Life
by
Rudolf Steiner
An Autobiography

Published by Anthroposophic Press in 1951

As a little child Rudolf Steiner had the conviction that a soup bowl or coffee cup was meant to be used only once, so every time he was not being watched, he smashed them after drawing nourishment from them. Similarly for the materialist teachings that he was fed as a child -- he smashed them after drawing nourishment from them. He supped deeply from the bowls of Kant and of Nietzsche, and then blatantly smashed both of their bowls. In their place he created an unsmashable bowl out of spiritual clay, as real as earthen clay, but which cannot be experienced by the senses, only by the higher faculties.

Imbued with these higher faculties, Steiner experienced spiritual realities directly and had little interest in teachings of past masters on subjects that he could experience in the present. This was his biggest problem with the Theosophical Society and led to the schism that split off his Anthropological Section as a separate society. The final break came with the Society announced that a Hindu boy was the reincarnation of Christ on earth and called him the "Star of the East." Too bad. The Society, in it worship of the past, was not able to perceive the "Star of the West" in their very midst, Rudolf Steiner, although many members did recognize his value in Germany and left the Society with Steiner to form the Anthropological Society.

Steiner, years before Carl Gustav Jung, described the "reality of the psyche" - he not only spoke of it, but he directly perceived and experienced it. In his own words:

As thinking takes possession of the Idea, it merges with the primordial foundation of the world; that which works without enters into the spirit of man; he becomes one with objective reality at its highest potency. Becoming aware of the Idea within reality is the true communion of man.

Thinking has the same significance in relationship to Ideas as the eye has for light,
the ear for sound: it is the organ of perception.

I wished to show that man, in thinking, does not form conceptions regarding nature while standing outside her, but that knowing means experiencing, so that, while knowing, man is inside the being of things.

I had sought to make it clear in my book that no unknown lies behind the sense-world, but that within it lies the spiritual.

He [the Materialist] contemplates matter without becoming aware that he is really in the presence of spirit, which is simply manifesting itself in the form of matter. He does not know that spirit metamorphoses itself into matter in order to attain ways of action which are possible only in this metamorphosis.

...matter so conceived in thought that it is impossible to trace it to the point where it is spirit. Such matter, postulated by this way of thinking as real, is nowhere real.

In Steiner's metaphor, only the tree, roots, trunk and branches have been examined by the materialist. By stopping before the flowers at the tips of the branches, they are at a loss to explain either origin or propagation of the tree. Using this metaphor, one might say that Rudolf Steiner and Marie von Sivers were the bees that pollinated the flowers on the tree of Theosophy to bring to fruition the science of Anthroposophy.

In his writing on individualism, Steiner gets very close to Dr. Andrew J. Galambos' V50 precepts when he describes ideas as object to be perceived by the organ of perception, thought. As a discoverer of ideas, one would have rights of property no less than if it were a piece of unexplored land.

Scientist, mystic, educator, innovator, Steiner was at least a hundred years ahead of his time, maybe more. His re-discovery is long overdue. This book is a great starting place for that journey of discovery.

In the end of the book, Marie Steiner explained Rudolf Steiner’s apparent lack of popularity and the vehemence of the attacks he and his work has been subject to. He is said to have died of poisoning, which explains the reference in her poem below to “venom” and his major architectural work, the first Goetheanum, executed in wood, burned to the ground apparently by an arsonist, which explains the reference to “flame.” The rest of this review is in Marie Steiner’s words.

His life, consecrated wholly to the sacrificial service of humanity, was requited with unspeakable hostility; his way of knowledge was transformed into a path of thorns. But he walked the whole way, and mastered it for all humanity. He broke through the limits of knowledge; they are no longer there. Before us lies this road of knowledge in the crystal clarity of thoughts of which this book itself constitutes an example. He raised human understanding up to the spirit; permeated this understanding and united it with the spiritual being of the cosmos. In this he achieved the greatest human deed. The greatest deed of the Gods he taught us to understand; the greatest human deed he achieved. How could he escape being hated with all the demonic power of which Hell is capable?

But he repaid with love the misunderstanding brought against him.

He died - a Sufferer, a Leader, an Achiever -
In such a world as trod him under foot
Yet which to raise aloft his strength sufficed.
He lifted men; they cast themselves before him,
They hissed with hate and blocked his forward way.
His work they shattered even as he wrought it.
They raged with venom and with flame;
And now with joy they brand his memory: -
So he is dead who led you into freedom,
To light, to consciousness, to comprehension
Of what is Godlike in a human soul
To your own selves, to Christ.
Was this not criminal, this undertaking?

He did what once Prometheus expiated
What gave to Socrates the poisoned cup -
The pardoning of Barabbas was less vile -
A deed whose expiation is the cross.
He made the future live before you there.
We demons cannot suffer such a thing.
We harry, hunt, pursue who dares such deeds
With all those souls who give themselves to us,
With all those forces which obey our will.
For ours are the turning-points of time
And ours this humanity which lies,
Without their God, in weakness, vice, and error.
We never yield the booty we have won,
But tear to pieces him who dares to touch it.

He dared - and, daring, he endured his fate -
In love, long suffering, and tolerance
Of weak, incapable humanity
Which ever all his work in peril set,
Which ever wrenched his word' awry,
Which misinterpreted his kind forbearance,
And in their smallness did not know themselves
Because his greatness was beyond their compass.
'Twas thus he bore us - we were out of breath
In following his stride, his very flight
Which ravished us away. 'Twas our weakness
That was the hindrance ever to his flight,
The lead that weighed his footsteps down ...

Now he is free, a helper to those high ones
Who take whatever hath been wrung from earth
As safeguard of their goal. So now they greet
The son of man who his creative power
Unfolded thus to serve the Gods' high will;
Who to the age of hardened understanding
And to the time of dead machinery
Stamped clear the Spirit, called the Spirit forth ...

They would not suffer him.
The earth rolls into shadows.
Behold those forms which now appear in space.
The Leader waits; the heavens part and open;
In joy and reverence stand the rangéd hosts.

But earth is wrapped in grey enshrouding night,
Springing from Powers of the Sun,
Radiant Spirit-powers blessing all Worlds!
For Michael's garment of rays
Ye are predestined by Thought Divine.
He, the Christ-messenger revealeth in you -
Bearing mankind aloft - the sacred Will of Worlds.
Ye, the radiant Beings of Aether-Worlds,
Bear the Christ-Word to Man.

Thus shall the Herald of Christ appear
To the thirstily waiting souls,
To whom your Word of Light shines forth
In cosmic age of Spirit-Man.

Ye, the disciples of Spirit-Knowledge Take Michael's Wisdom-beckoning,
Take the Word of Love of the Will of Worlds
Into your soul's aspiring a c t i v e l y!