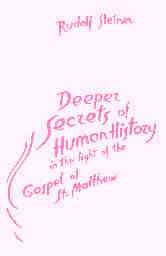 Deeper Secrets of Human History
In the Light of the Gospel of St. Matthew
by
Rudolf Steiner

In this paean to the evolution of consciousness, Steiner devotes much of the three lectures he gave in Berlin (1909) to the story of Abraham. Steiner lines up for us the following co-incidences: the two-horned Ram, the two-petalled lotus, the third-eye chakra, and the power of clairvoyance, then explains how Abraham, the first possessor of reasoned consciousness, was to father an entire people through his son only after sacrificing the gift of clairvoyance (represented by the Ram) in his son's place. After that anyone who sees directly into the spiritual world is cast out, as happens to Joseph. In Egypt, where such gifts were still a common human capability, Joseph was sought out by the Pharaoh. With Joseph's clairvoyance and inherited gift of reasoning from Abraham, he became the most powerful man in Egypt next to the Pharaoh. Later, in the time of Moses the dual gifts of clairvoyance and logical reasoning were united in the entire Hebrew people, and they were at last able to leave Egypt. (Notice also that Abraham's substitution of a lamb for his son in a sacrifice presaged the Sacrifice of the Mass today, in which the priest offers to each of us the Lamb of God as a wafer of bread and repeats Christ Jesus's word to us, "This is my Body — take it and eat.")

Abraham has two sons, Ishmael by Hagar (Sarah's handmaiden) and Israel by Sarah. Ishmael was cast out into the desert where he infused the race of Arabs with the blood of Abraham. Later the spirit of Ishmael returns in the form of the Law that Moses receives from Mount Sinai, which is the same word in Hebrew as Hagar. From Israel and Sarah came the faculties of the blood, from Ishmael and Hagar came the Law of Moses.

In the hairy Esau, whose inheritance the smooth-skinned Jacob obtained in a reasoned bargain, we see the residue of the old paradigm, a way of being that like Esau, must be cast out as we near the time of Christ. The sect of the Nazarenes ate carob beans (called locusts in the Bible) and wild honey while allowing their hair to grow long so that they could see directly the spiritual world as Esau did.

In the desert the Nazarene John was baptizing all comers in water. Steiner points out that near drowning, the etheric body is loosened from the physical body, where it has been confined since the advent of rational thinking in the person of Abraham. Thus the cry of John the Baptist, "Repent Ye!" may be understood as "Change the tenor of your minds!" That admonition, followed by a loosening of the etheric body, produced a powerful change in the lives of those baptized. John attacked the Pharisees, descendants of Ishmael, and warned them that in a true baptism, they will experience their etheric body as the "Lamb of God" and not as the "Serpent," as their ancestors had always done.

As Steiner closed these lectures he said:

These are but fragmentary contributions towards an understanding of the mission of the Hebrew people. Only when we fully understand this mission can we begin to comprehend the majestic figure of Christ-Jesus as presented to us in the Gospel of St. Matthew.