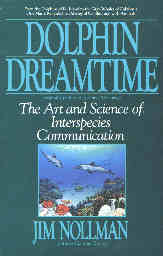 A READER'S JOURNAL, Volume 1
:
Dolphin Dreamtime by
Jim Nollman
The Art and Science of Interspecies Communication
Published by Bantam Books in 1987
Book Review by Bobby Matherne ©2002


Imagine a musician floating in a kayak in the North Pacific strumming on a waterproof guitar powered by a fifty pound battery. An underwater saucer-shaped loudspeaker propels the sounds to attract dolphins and killer whales. This is the reader's picture of Jim Nollman, perhaps the first Pied Piper of underwater denizens. Nollman got his start in inter-species music-making improbably enough in a turkey yard. Blowing on his clay flute, he was able to induce the turkeys to gobble on key and on beat to his songs. In fact, they became co-singers with him.

Later he extended his inter-species experiments by performing a ballet in a buffalo herd. By carefully pacing his approach to the huge animals to match the movements of the lead buffalo, he was able to approach within 25 feet or so. Then an astounding thing happened: a yellowish glow appeared surrounding the herd and moved like rings of smoke towards him, stopping only a few feet in front of him. He placed his foot carefully into the yellow haze, and the lead buffalo snorted and threatened to charge - then he pulled his foot out, and the buffalo calmed down. After several repeated trials, Nollman remained out of the yellow zone and soon the buffaloes ignored him. He had entered buffalo time and become one with them, and he had seen the physical energy field of the buffalo herd. Others, not having seeing it, had probably triggered the type of stampede that he had been warned might happen if he approached the buffalo herd.

Nollman makes a great case for our moving from a Specimen to a Participant approach when dealing with animal cultures, i.e., to learn to enter the world of nature as an anthropological participant rather than as a scientist ready to dissect a large carcass for cataloging and analysis. By becoming a living part of nature we humans have a chance to learn once more that the gift which animals offer us is a "guide back to balance."