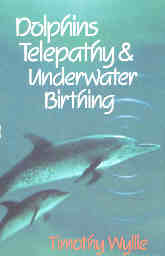 Enter a new world in which dolphins sculpture human faces acoustically in brain coral, store images in sand dollars(like living CD's), read human minds, and play therapist with unsuspecting humans. The author was treated by a dolphin Fritz Perls, who used his long, rigid triangular penis to cure him of irrational homosexual fears.

Wyllie describes a world in which dolphins put their heads willingly into the nooses of their captors, and deliberately commit suicide by beaching themselves on the beach, loving the whole process. He introduces us to Russia's famous doctor Igor Charkovsky who has personally assisted at over 2,000 underwater births. Dr. C. also treats newborns roughly and lambastes parents who kill their children by treating them with kid gloves.

Every chapter is a new adventure, whether it's taking Vitamin K with John Lilly to enjoy an afternoon chat with God, studying angels, skimming the Urantia Book, or dancing with the Maoris in New Zealand. Wyllie shares with the reader some of his interactions with two famous New Agers, Ken Carey of Starseed Transmissions and Barbara Ferguson of The Aquarian Conspiracy.

He inspired me in his discussion on astrological great years to consider the Lamb of God was the Ram from the previous Age of Aries living a symbolic life during the Age of Pisces. Projecting forward we might expect the appearance of Pisces Man during the coming Age of Aquarius. Might that be a man who talks to dolphins?

Wyllie's friend Peter sums it up best when he reminds us that if everything is perfect already, then you don't need hands and feet to manipulate your environment and flippers will work just as ell.

But mostly in this book, Wyllie treats us to people who experience dolphins telepathically - they feel directly an "overlighting" - a holographic 3-D image filling their entire body that gives them a sense of joy. A sense that is generated by this entire book. A must for dolphin lovers and Pisces People everywhere.