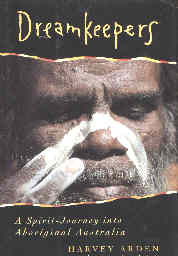 A READER'S JOURNAL, Volume 1
:
Dreamkeepers
by
Harvey Arden
A Spirit-Journey into Aboriginal Australia
Published by HarperCollins in 1994
Book Review by Bobby Matherne ©2002

Everywhere Harvey Arden went in the Kimberley region of northwestern Australia he gave the aboriginal people a copy of his book Wisdomkeepers and said, "I'm here to write a book about you like I wrote this book about the American Indians." Time and again the aboriginals read aloud sections of the book, adding, "That's us!" While asking the aboriginal Jack Rogers to paint up, Jack said, "Only do that for ceremony." This response led the author to recall the response he got from the Lakota elder Mathew King when he asked King to don his "war bonnet":

White man always gets everything wrong. He calls us savages, but he's the savage. See, he calls this headdress a war bonnet. Sure, we used it in war, but most of the time it was for ceremony. Every feather stands for a good deed, and I have thirty-six in mine. It's not about war; it's about who we are. When we sing songs he calls them war songs. But they're not war songs , they're prayers to god. We have drums, so White Man calls them war drums; but they're not for war, they're for talking to God. there's no such thing as a war drum. He sees how our warriors paint their faces, so he calls it war paint. But it's not for war, it's to make it so God can see our faces clearly if we have to die.

Feeling guilty after taking his photo of Jack Rogers, which picture adorns the cover of this book, Arden told his guide Mike, "Maybe I shouldn't be doing all this." Mike's response sheds light on the essence of this wonderful book about the aboriginal people of Australia, "Sure you should, mate. What you're doin' is important. You're seeing through all the crap to these people's dignity. That's well worth doin' to my mind."

That is the grace of Dreamkeepers that sets it apart from other books about the Australian Outback (See Tracks by Robyn Davidson). This book allows its readers to see through to the dignity of the aboriginal people.

In addition to the cover photo, every chapter begins with a splendid black and white photo, a close-up of the aboriginal interviewed within the chapter. And the interviews are as memorable as the photographs. Here are some quotes from the aboriginal people Arden interviewed for this book:

"Get your own Dreamtime. Don't take ours!" aboriginal man in Hawaiian shirt.

"To change the world we have to change ourselves . . . You must become the change you want to see in the world." Reg Birch, Kimberley Commissioner.

"Just stop by and say hello to us, that's all we ask." Daisy Utemorrah

With delicacy and sensitivity Harvey Arden did just what Daisy recommended. He stopped by and asked the aboriginal people about themselves and wrote exactly what they told him. He wrote their words, not compiled into a concise philosophy, but just their words, as they described their evolving emergence from repressed slavery into freedom and dignity. So that they may begin once more to walk their sacred land in a never-ending Dreamtime, where every step is a prayer and place is a story.