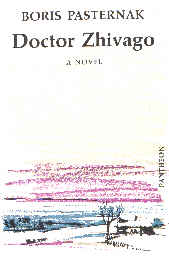 I first read Zhivago when I was seventeen; it was a hardback from Book of the Month Club. I was confused by the plethora of polysyllabic Russian names. I stumbled through the book with only a vague idea of the love story. Like a supersaturated liquor before the crystal has formed I saw it: a formless mass in solution. Some years later I viewed David Lean's spectacular film of the book, and it was as if the crystal had formed out of the liquor. A shiny, multi-faceted jewel, suspended rotating in the clear liquid, it reflected laser beams of colored rays as it slowly turned. The confusion was gone and each facet of the crystal sparked in delight before my eyes: Tonya, Yuri, Lara, Komarovsky, Strelnikov, and Evgraf.

Some parts of the book were missing from the film, some were moved around, but the best parts were there, e.g., the scene in the movie where Lara and Pasha light a candle and places it against a frozen window pane. The heat of the flame melts a dark eye into the frozen night air — that's in the book, which also includes the scene where Zhivago and Tonya pass on the street and Yuri looks up at the candle and thinks deep thoughts.

Evgraf starts off the movie, but only shows up late in the book as a key character. Missing from the book was the long trek in the ice and snow to Yuriatin that was so effective in the movie.

One of the keys to my sorting out the names in the book was learning that the suffix "-vich" on a name means "son of" in Russian. Thus Yuri's family name is "Zhivago," but he is equally often called "Andreivich" after his father's name "Andrea." Similarly, Komarovsky is called Ippolitivich. The feminine patronymic form is "ovna" — thus Lari is sometimes called Andrepovna.

Pasternak is a pure pleasure to read — this is a book that is not tarnished by its movie, but enhanced by it. The scenes of the movie glowed in my memory when I reached them in the book. Like the movie, I didn't want the book to end, and when I finally closed the book for the last time, a feeling came over me like a cool summer breeze over bare skin. The feeling covered my upper torso and I felt suspended in time. I thought of the time of the ice palace with Lara and Yuri, and knew that that was enough for Zhivago or any man — that, despite the horror of life falling apart everywhere around him, he had lived life to its fullest.

By the time I finished this novel the second time as an adult, I wished that I could read the original poems at the end of the book by Pasternak in Russian, who was as great a poet in real life as his fictional Yuri Andreivich.