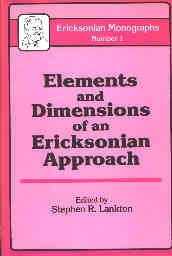 A READER'S JOURNAL, Volume 1
:
Elements and Dimensions of an Ericksonian Approach by Stephen R. Lankton
Ericksonian Monographs, No. 1
Published by Brunner Mazel, NY in 1985
Book Review by Bobby Matherne ©2002


monograph - n. - a learned treatise on a small area of learning.

I wonder why Steve chose such a title for this collection of papers - probably because of the open-ended nature of the genre. He's done two already and obviously plans to continue on until retirement - riding Milton H. Erickson all the way to the top of Squaw Peak. He includes one essay by his wife Carol who says, "He (MHE) was quite straightforward about his belief that people were usually happiest in traditional marriages, bearing and rearing children," which tells us a lot about Carol's belief.

Steve also includes an essay by his favorite person, himself, entitled A States of Consciousness (SoC) Model of Ericksonian Hypnosis. He quotes Berne (1972), "the child is, in effect, hypnotized by his parents." He then refers to the ego states as SoC (Charles Tart's abbreviation), becoming the first author I've encountered that has thought to correlate Tart's SoC material with Ericksonian therapy.

William J. Matthews in his article, Cybernetic Model, points out the recursive structure of the psychotherapy situation and offers useful insights to non-cybernetic thinkers in the therapy field.

Michael D. Yapko in his treatise on depression (page 89) illustrates this recursiveness in his statement, "Posthypnotic suggestions to build an association between a learning and a specific context can better assure such outcomes." He was discussing how a client is guided into a situation where they will discover a valuable resource.

Then Mr. Hammond hobbles in on his Ericksonian crutch (page 114): "Checklist for Utilizing Life Experiences, Interests, and Values." It contains 194 things people might do. I checked off all of them except scuba- and sky-diving and nursing children. I consider nursing certainly the one requiring the most common sense, but it made me wonder how Milton survived without this checklist - how much better he would have done with such a checklist. How did he manage without it? Perhaps he used on-line live feedback rather than an off-line checklist.

The last and best article in my opinion is the one by Jeffrey Zeig on his experiences with Milton. He reminds me a bit of Ernest Rossi in his penchant for literal interpretations. Milton referred a client to Zeig with a phobia for white powder, and Zeig, stumped, called Milton for help. He got only this obscure response, "Send him to Canada." Zeig ignored Milton's suggestion which only baffled him, and then, years later, came to understand what Milton was suggesting - probably just in time to write this essay. All around, an excellent teaching metaphor, one worthy of Milton himself.

Where best to be surrounded by and become inured to white powder than Canada in the wintertime? When Milton was working, and that was all the time, it's like he was baking a cake, Richard Bandler told me once, and you were the cake. "Send your thoughts to Canada, Jeffrey," Milton was saying, in effect, as he was baking Zeig.

What a great way to close out this collection of monographs - with six Milton anecdotes by Zeig. Few things that folks have written about Milton rise to the greatness of the simplest thing that Milton did or said.