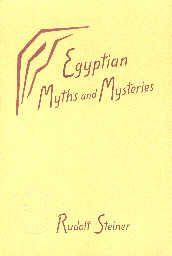 "We must not rob the butterfly of the dust on its wings." With this delicate understatement Rudolf Steiner sets the tone for his explanation of Egyptian myths and mysteries. He exhorts us to view directly the myth's territory, i. e., "the pictures that have risen out of the occult facts and have passed over into the consciousness of man," and to disdain attempts to add meaning by creating naive interpretations (maps) of the myth.

Steiner divides the pre-Atlantean epochs of the earth into the following quarternity: 1) Unity: Sun-Moon-Earth; 2) Duality: Sun, Moon-Earth; 3) Trinity: Sun, Moon, Earth; and 4) Sun, Moon, Earth, Man. Scientists may note that this accurately mirrors the astronomical evolution of the solar system as best science can reconstruct it. The earth and other planets coalescing out of the sun's body and their moons splitting off later from their mother planets.

These four astronomical (and spiritual) epochs close at the time of Atlantis and re-appear in the same order during the cultural periods that followed the water-catastrophes of Atlantis:

1) The primeval period of India with the unified consciousness of Brahma.

2) The primeval period of Persia with the duality of Ahura Mazdao (Sun God) and Ahriman (Earth-Moon God).

3) The third cultural period of the Egyptians, Chaldeans, Assyrians, and Babylonians with the trinity of Osiris, Isis, and Horus.

4) The fourth cultural period of the Greco-Latins mirrored the fourth earth epoch of Atlantis during which four-parted man, physical, etheric, soul and spirit, walked the earth with the gods. These memories of walking with the gods reappeared to the Greeks in etheric form at night when man raised from their physical bodies at night.

If one imagines a menorah with its seven candles and attaches the above ages from left to right to each candle: Indian, Persian, Egyptian, Greco-Roman, then one can see that the current, or Fifth Age, is connected to the Egyptian or Third Age, just as the third candle-holder of the ancient menorah is connected to the fifth. the Fourth Age, the Greco-Roman, like the fourth candlestick in the menorah, stand alone: it is the pivot point between the first three ages and the ages to come. The Sixth Age will reflect the Second and the Seventh, the First.

Steiner says that, "no symbol can be rightly interpreted unless one can point to what can be seen in the spiritual world in connection with it." He describes the evolution of man from a vaporous being of spiritual stuff into a bastion of physical stuff, placing at each stage the astrological age that, during which, that portion of the body became physically perceptible. Explaining another set of symbols, he says the symbols of bull, lion, eagle, and man represents the four types of man. One can easily see that his view maps easily onto Carl Jung's typology: sensate (physical), feeling (etheric), thinking (astral), and intuitive (ego). The four key figures of the popular Star Trek series map as well: Scotty (bull) - the engineer in charge of the physical plant (the Starship Enterprise); Bones (lion) - the doctor in charge of the feeling function, the emotions; Spock (eagle) - the science officer in charge of the thinking function; and Kirk (man) - the captain in charge of the intuitive function, who pulls hunches out of the blue to save his ship and crew.

"Man stood at his highest point in the Indian culture," Steiner says. Then man began the descent into physicality, first in the latter stages of the Indian cultural epoch, lower still in the Persian epoch, further still in the Egyptian (pyramids are the first large scale physical artifacts of man), then the Greco-Roman epoch. Steiner dissects the Greco-Roman period to show that the Greeks felt part of a people, a polis, whereas Romans created the concept of citizen, in which the concept of individual rights were first created. Man had descended into physicality and ego so far that he had lost all connections with the spiritual world. Thus the stage was set for God to descend to earth as Man in the physical body of Christ to trigger the possibility for man to begin his return ascent towards the spiritual realm. Steiner closes the book with a reminder that we are to "preserve the confidence of the first Christians" who lived in the underground catacombs of Rome and whose views prevailed to our time while those of imperial Rome have disappeared. With steadfast adherence to the spiritual view, we are like the potato farmer, who must carefully nourish their seed potatoes underground in anticipation of a bounteous harvest to come.