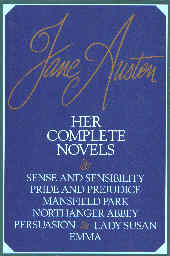 A READER'S JOURNAL, Volume 1
:
Emma by Reading for Enjoyment
Published by Gramercy Books, NJ in 1981
Book Review by Bobby Matherne ©2002


While reading When Words Lose Their Meaning by James Boyd White, I encountered his analysis of Austen's work Emma. His view was that the work takes several readings to fully assimilate and after this first reading, I agree.

What stands out most for me is the realization I came to when nearing the final chapter that Austen was writing of aspects of life that I never considered as objects for writing about. Nor do I ever recall reading about before. It was as though I lived these aspects, and yet I never considered that someone would write of these feelings, thoughts, considerations, hopes, dreams, etc. I was so much involved in them as process, that I never considered them as content. That was a major shift for me — whole new areas and arenas of understanding and meanings in life opened up for me. It was as though I had lived life halfway, had seen it through a glass darkly, and now a window had opened onto a hitherto unspoken and unrealized aspect of my life — one that I can see clearly from now on.

I suspect that my usage of parentheses (so much affected by Austen's usage) will change, also.Typing up this review thirteen years later, I removed most of the parentheses and had to re-insert several so that the previous sentence would make sense. I did not experience it as words losing their meaning, but certainly I experienced myself as changing in the process of reading, which was White's thesis in his book.

"Two letters that mean perfection: Emm-a." I fully agree with the character who uttered those words, as it applies to the book Emma as well as to Miss Emma Woodhouse, the eponymic character of the novel.

There were many other learnings: how having the official title of matchmaker prevents such errors as a man's thinking that Emma's solicitousness reflects her desire to marry him when she only intends to marry him off to some other young lady she has chosen for him.

Overall Mr. Knightley reminded me of myself and Miss Woodhouse reminded me of several lady friends. I daresay that many men who read Emma will likewise form a similar connection in their lives.