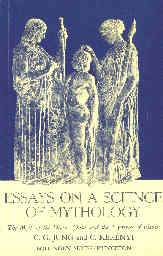 A READER'S JOURNAL, Volume 1
:
Essays on a Science of Mythology
by
Carl Gustav Jung and C. Kerenyi
The Myth of the Divine Child and the Mysteries of Eleusis
Published by Princeton University Press in 1973
Book Review by Bobby Matherne ©2002

Somewhere towards the end of this book I wondered when the "science" aspect of mythology would emerge. It never did. What did emerge again and again were images of Persephone and Demeter and the Eleusinian mysteries, which remained as much mysteries to me after reading this book as they had been before.

The first part of the book deals with the primordial child as depicted in various mythologies. The theme of abandonment (in a reed basket for Moses and a basket-size spaceship for Superman) is explained by the essayists as a necessary condition for the evolution into independence.

Now for my favorite trivia question: do you know the origin of the word "trivia"? I thought I did before reading this book. It comes from "tri" and "via" meaning "three ways" or roads - the intersection of three roads where in the days of walking journeys people would stop to talk to people they had met at the intersection. What did they talk about when they met? Trivia - only trivial matters could be the topic of discussions since they had met by chance. Notice how today people most often stop to chat at the intersection of three aisles in modern offices. Then I read this book and find out that monuments to Hecate (the goddess of the threefold way) were placed at intersections of three ways and that her Roman name was Trivia. Take your choice.

From the Eleusinian mystery rites one vivid image remains sustained by a recent beer commercial. The celebrant would hold up a ripened stalk of grain and face the audience. (Now he says, "This Bud's for you.") This recalls to the essayists the image of Buddha's famous Flower Sermon in which he held up a lotus in front of him and displayed it silently to his disciples. It is said that the lesson went uncomprehended by all but one of his disciples. The book containing the lessons comprehended by all of one's disciples would be very small indeed.