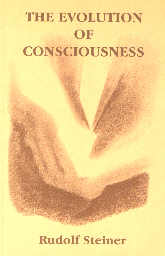 "Our science has gone so far as to make an ideal of discovering how things run their course in the external world without letting thinking have the slightest influence on them." With these words Steiner lays down the challenge for 21st Century thinkers: to re-discover man's true being as an active spirit creating new realities with its very thought processes. To think actively is to become informed about the object of thought. To "inform" is to form one's thoughts within the object: to know it internally and to be known by it. Humankind will flourish in this Information Age only if it remembers this ultimate truth.

The physical body touches other physical bodies. The etheric or formative forces body (what Rupert Sheldrake calls "morphogenetic fields") is a supersensible member of our human organization that provides another form of touching. Thinking, as higher sense organization, can both see and grasp (touch) the etheric body. Thinking seen thus is an active in-form-ation spirit that manipulates (sees & touches) physical and etheric bodies. Scientists can never prove this to be true because, by the very nature of their current paradigms, they have systemically refused to influence the outcomes of their studies by their thinking. In fact, scientists who do so are suspect and summarily cast out from the Halls of Academe. Always they look for objective data - data untouched by human thinking, so to speak, up until now.

What is the relationship of man to the three worlds of the physical, etheric, and the astral (thinking) planes? Steiner lays it out in detail in Lecture 5.

In the center of the book, he discusses his key concept, which is the consciousness equivalent of "ontogeny recapitulates phylogeny." He points out how the course of human evolution has mirrored the evolution of the world as a whole.

One important point he makes is about the stone monolithic structures of the Druids. Scientists call them observatories and assume they were used to make astronomical observations. Steiner says that the typical monolith "served as an observatory for the Druid priests, enabling them to see how the souls of their people stood in relation to the cosmos." (Modern astronomers and scientists in all fields should pay more attention to how people's souls stand in relation to the cosmos, instead of making fun of astrologers.) The important stone alignments were not those that allowed light beams to pass between the stones according to Steiner, but those that allowed supersensible radiations to pass through the stones themselves.

Steiner warns us, some forty years before Thomas Kuhn penned his tome about paradigms:

The danger lies in the surrounding of people everywhere with atomistic and molecular pictures -- it is impossible, when surrounded by such pictures, to look at those of the free spirit and the stars; for the atomistic picture of the world is like a wall around man's soul -- the spiritual wall of a prison.

Steiner stands before the reader like a warden of that prison, ready to hand over the keys to readers who are ready to unlock their cultural prisons, and step into the very real world of the spirit that thrives outside the prison walls of conventional science.