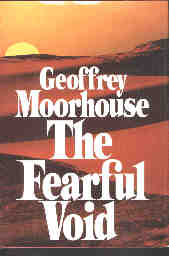 The intrepid Englishman Moorhouse undertakes this journey by camel across the Sahara Desert for the very reason that he was afraid of it. Also for the very English reason that it had not been done before. His pre-trip planning and preparation for the journey included reading stories by previous travelers of the region, learning to read and speak in Arabic, and learning to ride a camel. But little prepared him for the hideous conditions he was to encounter on the trackless wastes from Morocco to the Nile River.

Traveling during the winter allowed him to avoid the hottest days on the scorching Sahara sands, but exposed him to bitter cold nights in the desert. The major hazard he encountered was not the desert, but the hired help that provided labor for loading camels and translating local dialects. They stole food from the communal food pouch, disappeared into passing tents for affairs d'amour, spilled precious water through carelessness, and broke his sextant by improperly tying down a camel. Most suspect of all their activities was their camel-buying assistance. Always Moorhouse had to depend on them to procure camels and always he seemed to pay much more than the going rate. He also paid more for his hired hands than he had contracted for, usually before the end of their term of service.

Using only a sextant he was able to navigate to within a mile or two of a spot on his US Defense Department maps, a requirement for survival in the Sahara where you could just barely carry enough water to get to the next oasis. Once, one of his men spilled a container of water, and Moorhouse nearly died from thirst before he reached the next watering hole.

His other traveling companions were the lice that infested his clothing and bedding. Traveling under such conditions for over six months without any possibility of a bath seems beyond the endurance of a Westerner, but Moorhouse managed. Dehydrated, starving, dysenteric, body bloody from scratching lice, muscles sore from camel riding, blistered lips, and sunburnt all over, he arrived at last at the Trans-Saharan Highway in Libya and completed his journey in March, six months after he started and many miles away from his goal, the Nile River.

His most remarkable accomplishment, other than mere survival, was keeping from being jailed by the various law enforcement and military officials he met along the way. An Englishman with American Defense maps in the desert seemed very suspicious. Those who might have a romantic idea of travel in the desert can read Moorhouse and be instantly disabused of such a notion.