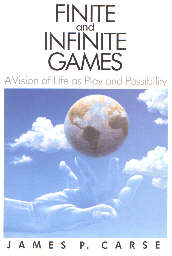 Finite and Infinite Games by James P. Carse
A Vision of Life as Play and Possibility

This reminds me of the Radical Therapy Conference in Madrid, Iowa in 1977 where I played volleyball without keeping score. It was really more fun because everyone accepted that the purpose of play was for the fun of it, and the fun was maximized by the absence of arguments or discussions about the score, about how many people were on each side, about whose side who was on. You could even swap sides at will, but few did. It was obvious to all, though unspoken, that the purpose of the game was to continue the game as long as possible. That made it the first finite game that I can remember encountering as an infinite game. I can remember many infinite games from my youth when my brothers and I played shoot'em up games that involved climbing over, crawling under, and sneaking around things to get the jump on the other person and shoot them before they could shoot back. No one counted how many times you shot the other person first because he immediately jumped back to life and the game continued as long as our energy and our parents allowed. Thus it was a surprise to me to find out that someone had given the name "infinite game" to the very type of game I enjoyed most as a child. To summarize: normal volleyball is a finite game and scoreless volleyball is an infinite game.

This is one example of the kind of zings that rang through me several times a page while reading Carse's ground-breaking book. It is loaded with insights - not new knowledge per se, but a new way of holding or looking at old knowledge, a way that resonates with my whole being. Another example: Sherman's march to the sea so violated the sense of spatial limitations of the finite game of the Civil War that for many Southerners the war has never ended, i.e., has turned into an infinite game for them. [Note: The current dispute over the Confederate flag flying over the State House in South Carolina (in year 2000) makes new sense when understood through Carse's insight.]

The most entrancing aspect of Carse's book is the syntax-form that he uses continuously throughout the book. For example: "It's not so much that he uses the syntax-form as the syntax forms the uses he describes." The form might be described thus: It's not that X=Y but that Y=X might be a generic expression of the syntax form. By the end of the book, the form begins to weigh heavily as he gets to more abstract values such as society, freedom, and evil. He is remarkably consistent in his definitions - it's always possible to understand his rationale if you first review his definitions.

An utterly charming, intriguing book that is literally stuffed with quotable quotes! Such as:

"The finite play for life is serious; the infinite play of life is joyous."