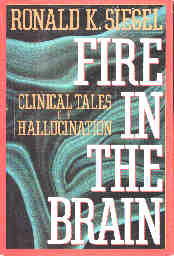 As a graduate student Siegel began interviewing subjects about what visions they saw while under the influence of hallucinogenic drugs. They described similar geometric patterns, lights, and tunnels. When he asked a friend how he might determine the reality behind the recurrent images, his friend suggested that Siegel become his own subject so as to report firsthand his own experiences with such images. Thus the author began his journeys as a "psychonaut", one who ventures into the realm of the psyche, an astronaut of inner space instead of outer space.

Siegel took mescaline and saw a huge disembodied eye hanging on a black curtain, the Demon, he called it. During a subsequent trip to Mexico, he visited a shaman, and eventually found out that his vision of the Demon Eye originated from an old slide he had used many years before.

The rest of his stories are interviews of people with interesting hallucinations. Like Constance, the piano teacher who, on DMT [dimethyltryptamine], began to hear the voice of God as chimes in C-sharp minor, and was unable to continue giving piano lessons. She came to Siegel for help in removing the distractions so she could work again. Siegel tried to convince that it was only an "idiosyncratic disturbance in her brain chemistry" and that "an unknown DMT by-product was floating around in her cerebral cortex". In response she played a recital of "an all-Beethoven program including the Moonlight Sonata". Playing the piece in C-sharp minor, she entranced Siegel, who was reminded of "the line from Amadeus where Salieri, upon hearing the music of Mozart, remarked, 'It seemed to me I was hearing the voice of God.'"

In some of his case studies, Siegel is careful to debunk them: the UFO becomes an Isakower phenomenon (archaic memory of mother's breast) and Nancy's imaginary playmate Chopsticks flies off to Never-Never Land, no longer to be a realistic figment of her imagination.

In other cases, he joins in the fun, as when in The Cage, he has someone lock him in a similar cage to the "tiger cage" his subject was imprisoned in, while in a prisoner-of-war camp in Vietnam.

In the rest of the cases he reports the results of his interviews, and is as amazed as the reader by the happenings. In this category is: 1) Jack who, while lost in the Bermuda Triangle, talks to his dead brother John and finds his way back to Miami, 2) Steve, who channels his unborn daughter Star, and 3) Ace, his old professor friend who fell from his ladder as an atheist and returned from Heaven as a believer in the reality of God.

Ron Siegel set out to prove hallucinations are merely effects of brain fever, Fire In The Brain, but in spite of his best efforts, the cases themselves speak directly to a reality of the psyche that transcends the physical body and brain chemistry.