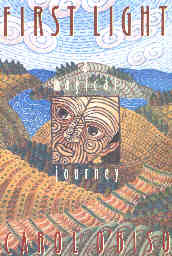 One hundred and seventy-four wooden objects will be flown from New Zealand to the USA and back, living ancestors of the Maori people of New Zealand, led by Pukaki, the god who guided the rainbow arc of boats from Haiwiki to the islands of New Zealand over 700 years ago. Their escort will be a girl from America, who will take them away from their native land for the first time ever: our intrepid author, Carol O'Biso, jogger, art expert, and registrar of the American Federation of Art.

An unlikely scenario for an adventure story, much less for a magical adventure, but such is the fare O'Biso has spread for us in this Maori feast. The art pieces are alive in the minds of the Maoris, she discovers, and a ceremony must be conducted over every piece before it is allowed to leave its resting place. In a crowded hall the Maori intone their wailing songs of farewell, their speeches, their concerns for the return of their beloved ancestors while this girl sits, listens, and is not allowed to make a speech or response - not because she is taking away the statues, but because she is female.

The lights go off mysteriously, the electric drills break, the truck's battery catches fire, a blizzard hits St. Louis, a heat wave New York City, and the statues consult with Carol. Step by step she allays their fears and keeps her promise to return them safely to their native land.

When the statues return home, so does Carol - but her new home is New Zealand, not New York as before the magical journey. New Zealand, a place where one musters sheep or they die. Their coats are bred for fast-growing wool and must be sheared yearly or they will fall over from the weight of their wool in a rainstorm and die, unable to get back on their feet. Searching for eight lost sheep on a sheep ranch, Carol experiences an activity for the sake of itself, saving the lives of eight sheep. And just as she saved the lives of 174 ancestors by returning them to their native land, she saves her own life by returning herself to her new, adopted native land of New Zealand.