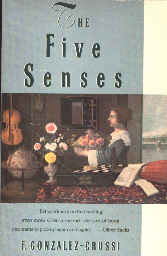 The Five Senses
by
F. Gonzalez-Crussi

Crussi takes us on a journey that maps on that of a baby in its transit from the womb to its mother's arms. The first sense that it experiences in the womb must be touch — the full body kinesthetic experience of its immediate surroundings. Soon the infant becomes aware of a new set of stimuli in the form of auditory impressions from its mother's environment as the sounds are carried by the amniotic fluid to its eardrums. Considering the faster speed of sound waves in liquids, the gestating babe actually hears sounds before its mother does. Once its nasal passages are free of amniotic fluid upon birth, a new sensation reaches the newborn, smell. The sameness of the fluid that pervaded its olfactory passages is replaced by a diverse panoply of distinct smells. The eyes that have been in uniform twilight are at birth blasted into washed out brightness until the baby's ocular control system learns to vary the brightness and contrast until a decipherable image appears out of the milky mist of the hospital room. Still only blotches of color, it is sight nevertheless. At last the first food is administered in the form of mother's milk and the taste buds, so long stifled by the uniformity of the amniotic fluid, respond to novel gustatory signals of sweet, sour, bitter, and salty flavor. Add the kinesthetic signals of the warm breast, the auditory humming of the mother, the smell of her perfumed skin, and the soft pink light effusing from her bare skin, and you can get a glimpse (which is a visual way of saying it), a tiny inkling of the overwhelming novelty of the first minutes of a newborn's life.

TOUCH — how Benedetto Castelli (1577-1643) discovered the basic principles of radiant heating by feeling black and white bricks in the sunshine.

HEARING — how Philip V of Spain was cured of a depression hiring a singer to sing arias to him at his bedside. (Reminds me of Norman Cousins, who used Marx Brothers films for a similar purpose in the 1980's)

SMELL — how Condillac (first NLPer — Neuro Linguistic Programmer) believed "that all cognition rests upon the perceptions conveyed by the senses." How a pinesaw fly attracted eleven thousand males to her in eight days even though she was dead the last of the three days. How doctors can detect diabetes in patients by the smell of acetone on their breaths. How the "sweet smell of death" has its origin in the smell of saints and holy persons.

SIGHT — How the "windows of the soul" may be a two-way conduit, explaining why Islamic women wear veils to protect them from the glances of others.

TASTE — How his father's taste for the hottest peppers of the surrounding hills of his home in Mexico led his father into an abortive attempt to re-open an abandoned silver mine, and to an ignominious death.

This book touches on all the five senses of the reader, activating them in new ways to bring the reader to an epiphany of human delights.