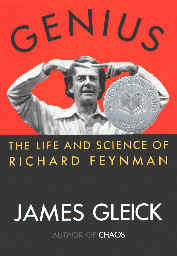 A READER'S JOURNAL, Volume 1
:
Genius
by
James Gleick
The Life and Science of Richard Feynman
Published by Pantheon Books in 1992
Book Review by Bobby Matherne ©2002

"Genius is the fire that lights itself," Gleick quotes an unnamed source as saying. Feynman was such a genius. Freeman Dyson said of him, "He was searching for general principles that could be flexible enough so that he could adapt them to anything in the universe."

In the derivation of his Quantum Electrodynamics Feynman assumed that an electron might take any possible path from on place to another and added up the probabilities of each path. His method gave physicists back a physical view of the world of quantum events that they had lost in the increasing abstruse equations of Schrödinger and Schwinger.

His next simplification was the Feynman Diagram which allowed for a view of any particle interactions by plotting time and space on the xy-axes. On a Feynman diagram an electron moving forward in time from a particle fission could be viewed equally as valid as an anti-electron (positron) moving backwards in time to arrive just in time to re-join its pardner in the original particle. Suddenly the collision of particles could be viewed as the collusion of particles.

The photons of light you viewed through a telescope last night left that star 100 years ago as though a signal from you last night had travelled back in time 100 years to the star. Stranger still was the Wheeler-Feynman insight that all the electrons in the universe may be viewed as one electron that is continually zigging and zagging back and forth in time as it weaves the fabric of cosmic life.

Gleick's book takes us through Feynman's life in the intimate detail of a Travel Channel travelogue: from Far Rockaway to Caltech, from Los Alamos to Princeton, from Nobel Prize to Challenger investigation, from physics professor to bongo player, from devoted husband to Arline to "noetic Casanova" picking up girls in bars and sleeping with wives of his fellow professors. He was eccentric to an extreme and amused himself in such weird past-times as cracking safes at Los Alamos (a dangerous endeavor in a place where the secrets to the atomic bomb were kept in safes). He thought that rhythm was to the sense of hearing what light was to the sense of sight and was continually tapping his pencil or fingers while solving problems. Playing bongos was the only time when his fingers were kept busy doing his primary job. He may have the sole distinction of being the only Nobel Prize winner in physics to have been a member a member of a Brazilian Samba Club.

In a children's story, The Magic City by Edith Nesbit, a boy learns that when one asks for a machine to do a task, one must keep using it forever. Mathematics was such a machine for Feynman. He learned a myriad of techniques and shortcuts to answers as youth and that machine kept him busy searching for bigger and bigger problems to solve as an adult. He seldom read physics journals, preferring to derive the answers to questions that puzzled him directly. He said many times that he refused to answer questions about other's theories because he refused to justify their results or predictions. He gave a course called Physics X at Caltech where students or faculty could come to ask any question at all.

Always Feynman distained honorary degrees, saying he had worked too hard on his real degree to respect any shortcuts. He also refused magazine subscription such as Physics Today, which sometimes required several letters of refusal before the editors got the message.

In his last great endeavor he solved the riddle of the Challenger explosion by a simple experiment that he performed during a press conference. He took some O-ring material, dunked it in 32 degree water to simulate the conditions of the O-rings on the fuel tanks during the Challenger take-off and showed how the cold O-rings lost their resiliency for a short period of time. The cold O-rings could not restore their shape quickly enough to fill the entire space between adjacent sections of the external fuel tanks and allowed the gas to escape that caused the explosion.