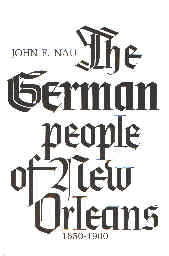 In 1853 a certain Joseph Eder wrote, "America does not say, 'Eat what we give you or starve,' but rather, 'Lazy fellow, work or die.'" This was from a "Bavarian Journey to New Orleans." One can only wish this were true of America in 1993 as well.

But there seemed to be no lazy citizens in the diaspora of Germans that flooded the American continent in the 1800's, especially those that populated the nation's fifth largest city, New Orleans. Its population was nearly one-fifth German at one point and had one daily German newspaper (The Zeitung) and many German singing societies. The most famous singing event was the Twenty-Seventh Choral Festival of the North American Saenger Bund (Singers Society) that took place near Lee Circle in 1890. A large hall that held over six thousand spectators was built for the occasion. The only remnant of that period of New Orleans history is the name of the famous theater, The Saenger, which is still in use today on Canal Street.

Founders of churches, dance halls, and breweries, the Germans worshiped, played, and drank as much as they worked. This Ph.D. thesis printed as a book is a very useful reference on the German contributions to the development of the city of New Orleans during the period from 1850 to 1900.

The Hahns, the Fabachers, the Jahnckes, the Deilers, the Ricks, the Frantzs, and many other German families all contributed to the building of the city on the banks of the Mississippi River and helped make New Orleans the city it is today.