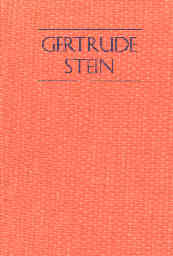 Tough, opinionated, hard-as-nails, a female Norman Mailer of her time was Gertrude Stein. She wrote a rhythm that rocked the twentieth century into an awareness of the architectonic nature of writing. She wrote in English but once said, "If English is to be spoken in unbroken intervals, I want it to be my voice." Thus she chose to live in Paris because she found the language there soothing. Her manner of writing was as cubist as her young friend Picasso's painting at the time. Here she sketches a feather:

When she first saw Picasso's portrait of herself, she exclaimed, "This is not the physical portrait of me. This what you see, the inside, the outside, the mind, the emotions, everything!" Picasso would often say when someone remarked that the portrait did not look like Gertrude, "Yes, but it will." He knew that the temporary non-seeing would be soon corrected by a study of the work.

In this biography we follow Gertrude and Leo Stein into adulthood. Inseparable since childhood, they live together until in their thirties they go on to "suck their individual oranges" --Leo his art criticism and Gertrude her writing.

Gertrude's notoriety was assured after she took a young journalist (Hemingway) under her wing and tutored him into a great novelist. She was Papa's Mama. She was the writer's writer and became much in demand for speaking to large literary societies. With her constant companion Alice B. Toklas, she brought relief to the French soldiers during the Great War. They were both astonished to find that the French peasants wore long faces after the Armistice. When they stopped one of them to ask why, he said, "There will be another war." She and Alice took great solace when after the Second World War the peasants rejoiced with the rest of the population.

Haunted ever by the problem of identity, an image came to her from the London slums. A small girl wandered drunk through the street repeating over and over, "My name is Meg and the world is round." Stein fashioned her into a children's story where her name is Rose and the World is Round. And ever since "A Rose is A Rose is A Rose."

Note: For links to about twenty more references to Gertrude Stein, Insert "Gertrude" in the Google box below and Search www.doyletics.com