A Glastonbury Romance Ś A Novel
by
John Cowper Powys

Published by The Overlook Press in 1987


Where do you start to describe a novel of 1120 pages whose first paragraph, "encompasses the cosmos," according to one reviewer? A book that Colin Wilson calls a "New Age Novel." A book that contains in its pages the Holy Grail, the haunts of King Arthur and Merlin, the Druids, the blood of Christ and the tomb of the man who carried the blood to Glastonbury, Joseph of Arimathea.

Between its covers the following happens:

1.) a midsummer festival with crucifixion

2.) a capitalist, a communist, and an anarchist forms a Glastonbury commune

5.) a conscious suicide by drowning

Powys glues these isolated events together in a web of interconnections and liaisons of various town people that is reminiscent of a Jane Austen novel or the dark TV series, Twin Peaks.

Overarching all the events of the novel is Powys's penchant for the spiritual interconnection of all life and life processes. A step down from the 17:10 train reverberates with movements in the far reaches of the farthermost galaxies. Or in the middle of the night, the here-and-now action resonates with the energies of the Druids, the Arthurian crew, the microbes and the dust-laden wind from the sea. As the wind blows across the various inhabitants of Glaston, we are given a complete genealogy of the constituent dust particles. Such breath-taking visas of descriptive prose are trance-inducing and the reader's soul is sucked into resonance with all life. Does an insect have a soul? After reading Powys's novel one cannot but wonder at the possibility.

The Somerset dialect, while important to the realism of the novel's setting, is difficult to read since all the dialect uses the first person, e.g., "he gave to I what they gave to he." By the end of the book, however, the dialect's sounds began to reverberate in my head, and it seemed natural for me.

By the end of the book Glastonbury had also entered my list of must places around the world to visit.

An Additional Review of this Book from 1988 is included below:

This book might be better entitled "Glastonbury Romances" because the romances of John and Mary, Sam and Nell, Philip and Persephone fill the first 300 pages of this large volume. John and Mary are cousins, both Crows, and their romance is the neurotic, on again off again type. Sam and Nell's romance is the single man and the lonely wife (her husband spend more time in Wookey Hole than in her, er, "presence"). Philip and Perse are both married, but not to each other. Perse's preference for sex with her tweed suit on tells us plenty about their relationship.

The central character is Mr. Geard who inherited Mr. Crow's fortune and properties and the plot turns on what he will do with his largesse. His plans are evolving into a Midsummer Festival on the grounds of the Glastonbury Abbey which contains many sacred artifacts, relics, buildings, and locations. These include St. John's, St. Mary's, Glastonbury Tor (the tower pictured on the cover), the tomb of St. Joseph of Arimethea (of the New Testament), the Holy Grail, the site of the Arthurian Legends (including Merlin), and ancient ritual arenas of the Druids, among other things.

Mixed into this melange of historical places and romantic couples is a group of ardent communists who push for Mr. Geard to turn the Crow factories into a worker run communist factory, even announcing it in advance of Geard's decision.

Geard for his part had one big scene in which he laid in bed with a pain-ridden woman with terminal cancer and gave her a good night's sleep without her usual morphine injections.

Colin Wilson praised this novel as a "New Age" work of fiction and it has certainly lived up to his billing. Powys writes with a depth of mystery and interconnection that is overpowering at times. He transfers the mundane into the timeless. For example, the simple act of stepping off the 5:20 train becomes a dance with the far reaches of the cosmos. He writes fiction as refreshing and enchanting as the New Age music of Andreas Vollenweider, Enya, and Paul Horn. 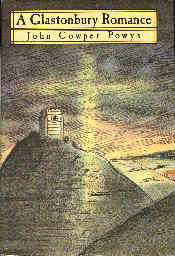