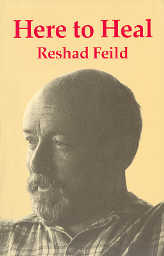 Here to Heal
by
Reshad Feild

Published by Element Books, Dorset/UK in 1985
A Book Review by Bobby Matherne ©1992

In this book Reshad covers some basics that any healer requires to be successful in his art. He covers the three R's of healing: Recognition, Redemption, and Resurrection. The second R, redemption, he says, we keep ourselves from by erecting three walls around our heart: the walls of resentment, envy, and pride. (See my poem, "Three Walls", which was directly inspired by this book.) Unless we dissolve, shake apart, or tunnel through these walls we will not heal ourselves and thus will not be able to heal others.

Feild discusses his experiences as healer of the earth, called a geomancer. By divining rods held over maps, he discovers vortices of negative energy and using iron rods clad with copper, he is able to divert the energy into useful channels. A couple at a small cottage have their peace interrupted by fires and floods (from an underground river, no less). He discovers that the nearby site of an old monastery had been paved over (shades of Amityville) and once he restored the disturbed flow of energy to its former path by directing it around the slab with his copper clad rods, peace was restored to the cottage.

He gives directions for the Mother's Breath: a sequence of 7-1-7-1-7 breaths: actually a rhythm, not a fixed time sequence. This is the same rhythm used by smokers of marijuana to produce altered states of consciousness.

Once when moving, a glass desk top sheared and a huge guillotine shard of glass sliced across my wrist. I automatically began breathing deeply and regularly in a similar fashion. The result was that the cut hardly bled at all. A friend who was watching me said she saw me stop the bleeding. That was the Mother's Breath I'm convinced now. Everyone should practice enough of this to ensure its availability in time of need.

Read this book and be ready with the Mother's Breath.

[Bobby's commentary found in handwriting from Back Inside Cover]:

April 20, 1989:
Hypnosis: Whenever you ask a question and happen to say remember when, if you mention a person, place or thing, you lead, via a subtle form of hypnosis, the other person into conjuring up an image of what you described. Do not do this unless that is your intention! ESPECIALLY note that the negation word "NOT" does not operate here. If I tell you "Do NOT think of a PINK briefcase," what color was the briefcase?

June 4, 1989:
Large Groups Suck: You must wait for everyone in the group to show up before you can move to another place. Thus, the person who has the most problems, the most kinks in their life, will hold up and inconvenience everyone else. This is the major difficulty with democracy. We are all dragged down to the lowest level of limitation, up until now!