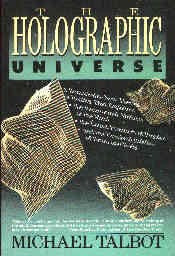 Didn't want to read this book to simply get a re-hash of what I already knew about holograms, quantum reality, and spiritual reality. What I got was a much better re-hash than I could have anticipated. Talbot has put together a comprehensive survey of the holographic theory of the brain and the universe, detailed in its completeness and insightful in every chapter, a tour d'force.

Building a holographic model on the works of Bohm and Pribram, he quickly out strips them by advancing into the spirit world, out-of-body experiences (OBE), unidentified flying objects (UFO), near death experience(NDE), and time travel, just to name a few acronymic excursions. The theme that pervades all these experiences is their holographic/implicate order paradigms melded into one seamless unity by the author.

Talbot's greatest contribution in this book is his compilation of the who, what, where, and when's of actual cases of psycho-kinesis (PK), OBE's, NDE's, and miracles, religious and medical. The kahuna that healed in minutes a compound fracture of her party guest's broken leg. The nail-like protuberances in St. Francis's stigmata. The Camisards in the 1600's that were order shot, only to find that the musket balls were flattened between their clothing and skin, leaving them unharmed. The Iceland man who made his arm and hand fade in and out existence in front of a panel of scientists. Hazrat Inayat Khan, whose body gave off so much light that people could read by it. Again and again, Talbot pulls impossible feats out of his hat and says to the reader, "See! Here's another feat that only a holographic explanation will suffice to explain."

Talbot leaves Rudolf Steiner and Owen Barfield out of his otherwise comprehensive book, but if he had read them, he could have quoted someone other than Australian aborigines to make his point about the coming new levels of consciousness. The aborigines predict a "return to dreamtime," a feat that Steiner calls a "new clairvoyance," one that will evolve to replace the now forgotten "original clairvoyance" of our distant ancestors. In Barfield's terminology, it is called "final participation," a process of direct knowledge of the world that will evolve to replace the ancient "original participation" that the aborigines call "dream time." Both Barfield and Steiner view the evolution of consciousness creating a new dreamtime, not a return to a former process of consciousness. A fine book to place on your shelf right next to Steiner and Barfield.