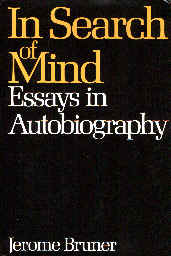 The autobiography of Jerome Bruner was a treasure trove of information for me on subjects that I am most interested: psychology, philosophy, linguistics, and epistemology. Bruner's list of friends would fill a Who's Who volume of experts in the above fields.

He was a true innovator: an innovator's innovator. One of the experiments Thomas Kuhn based his 1962 "Structure of Scientific Revolutions" (an innovative book on the subject of innovations) was designed by Jerome Bruner. That was the experiment with a card deck containing a red six of clubs. Bruner also worked closely with Jean Piaget. In Bruner's discussion of the "equilibrium between assimilation and accommodation," he clearly describes the "bootstrap" process of learning. Bootstrapping is the concept from computer science of how to load a program into a computer which has no program loader in it. The iteration between assimilation accommodation clearly describes the process. (See my poem, "Any Intuitions.")

Bruner came from the behaviorist model but developed beyond it to the inclusion of meaning and context at the human level. On page 59 he writes, "that was why rats would do in settling disputes." The sentence is meaningless unless you treat rats as an object. In much of his early studies he treated rats as objects, but he quickly transcended the Skinner Box that psychology found itself trapped in during the 40's and 50's. A valuable contribution of this book is that Bruner provides the chronological sequencing of the benchmarks books and research in his fields of specialty that might be extremely difficult to decipher from book publication dates. Plus he adds knowledge of the Ariadne's Thread of relatedness that would be missing (except for the bibliographies). Jerry, as he was called, was a "constructivist," one of the first. He quotes Sir Frederick Bartlett saying, "the past not recovered, but reconstructed, and each new reconstruction is based on previous reconstructions." Bruner's constructivism may be seen as his response to Goethe's cry for "mehr Licht."