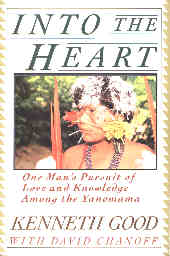 A READER'S JOURNAL, Volume 1
:
Into the Heart
by
Kenneth Good
One Man's Pursuit of Love and
Knowledge Among the Yanomama
Published by Simon & Schuster in 1991
Book Review by Bobby Matherne ©2002

The cover of the book leads the reader to suspect the book is about a trip into the heart of the Amazon, which it is, but even more. Kenneth Good is the anthropologist that took the trip up the Orinoco River to study an isolated tribe of people never encountered by whites before, the Yanomama people of the Hasupuweteria village. His plans to study the little people took on an immediate comic aspect when they spent all their time studying him and his strange foreign ways. He built a work area and building outside the shapono or tribal communal hut to allow him to work undisturbed, but this kept him from getting exactly the kind of information he needed about their daily living habits. He began his protein studies by weighing everything the Yanomama ate, and they cooperated with willingly, although they thought him strange. "Nabuhs," they said, using their name for foreigners, "not smart. They don't even drink the ashes of their dead relatives."

He had difficulty learning the language because the Y.'s spoke quickly and would seldom repeat a word slowly enough for him to mimic it with any accuracy. It was like trying to learn English in New York City from a local taxi driver. Children were a big help because they would gladly repeat a word over and over for him. Finally he located an adult that would speak slowly and teach him the language. This was his first break-through, and the informant, he called him, "Red," became his first Yanomama friend.

With some language ability under his belt, he moved into the shapono to become an integral part of the community, which he decided would be a requirement for him to complete his close-up study of their family life. He hung his hammock in a vacant spot around Red's hearth and soon discovered that night-time in the shapono is a time for public speeches and other outward displays of emotions. After several weeks of acclimation, he found he could easily get eight hours sleep by staying in his hammock for twelve hours like the Yanomama did.

One of the Yanomama girls grew up over the eight years he studied the village life and he finds himself accepting a betrothal to her, a year or so from her onset of menses. He leaves for a trip to German to study and when he returns, she is a woman and soon moves her hammock next to his. In a move that initially shocked the shapono residents, she began sleeping in his large two person hammock with her husband.

By the middle of the book, the Yanomama had moved into Ken's heart and he was deeply in love with Yarima, his wife. The second half of the book deals with his trials as he attempted to remain in the Amazon with her and later as he tried to take her with him to the states. During their marriage ceremony before a judge in Pennsylvania, she asked him to tell the judge, "that even if you become sick, I will still be your wife. If you cannot leave your hammock, I will go down to the river and get you water. I will harvest plantain and roast them for you. I will care for you and do all these things for you even when you are old. Even then I will be your wife."