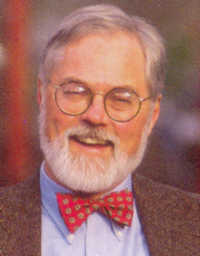 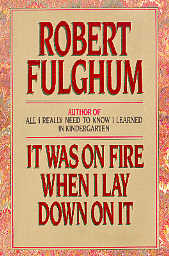 The fireman responded to an apartment fire and found a bed on fire. They questioned the tenant as to how the fire started. "I don't know," he said, "it was on fire when I lay on it." Thus was the title of Fulghum's successor to his "Kindergarten" book generated. Once again He mixes together a melange of anecdotes and philosophical nectar into a potpourri, which, when quaffed in deep draughts, warms the heart.

The three weddings he describes presiding at provide excellent examples of his genre. In the first wedding, the controlling mother's shenanigans are overturned by the bride's puking all over the wedding party in full view of the assembled congregation, Three video cameras, God and everybody. In the second the eloping brother-in-law (a widower) and sister-in-law (a widow) are surprised by their kids from both marriages, cousins soon to be siblings, who join in the ceremony. In the third episode, the marriage of a devout Catholic and a devout Jew proves that not only does love conquer all, but love is stronger than religion.

"Fulghum" is the only word on his business card as he does not wish to limit himself by putting an occupation on it. On airplane trips he prefers to concoct an occupation in order to generate conversation. Once he agreed with his fellow traveller that they would both choose alternate occupations and Fulghum chose "nun." The end of the plane ride brought him strange looks from the people seated behind him when they got their first glimpse of the nun to whom they had been listening.

His wife sleeps with a sleep mask on every night and when he goes to bed he chuckles to himself about sleeping with the Lone Ranger. He says he is now content to say things like "Goodnight, Kemo Sabe" to himself in deference to the sleeping beauty before him. This book is full of things that Fulghum has been privately chuckling about for some time and we are invited to join him in the fun.

[page 218] Some years ago I cam across a phrase in Greek — asbestos gelos — unquenchable laughter. I traced it to Homer's Iliad, where it was used to describe the laughter of the gods. That's my kind of laughter. And he who laughs, lasts.

If you would ask him, if this is his last book, I'm sure he would answer "Belum," which is a quaint word in Indonesia, a favorite word of his, that means, "not quite yet."