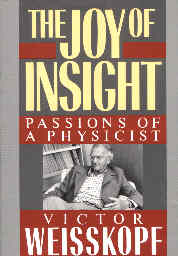 This book lives up to its title, providing dollops of both joy and insight within its pages. Weisskopf became a world renown physicist who worked with most of the great physicists of the 20th Century. He was a personal assistant to Wolfgang Pauli and Neils Bohr at two points in his career. On the Manhattan Project he worked closely with the Los Alamos team as the theoretical physicist. His job was to estimate the effects of the first atomic bomb blast at the Trinity site. He and Fermi estimated the yield at 7,000 tons of TNT, but Fermi had a plan to gather data during the blast for a better calculation. He dropped bits of paper during the shock wave and measured their deflection with a ruler as they fell. "Twenty-thousand pounds," he said matter-of -factly. Matter of fact, he was exactly correct.

In the movie "Fat Man and Little Boy" Weisskopf was undoubtedly in many of the scenes, although I did not detect him when I saw the movie. Maybe next time I will pick him out. "The existence of excited states always points towards an inner structure," he says on page 236. He refers to the presence of a spectrum as indicative of an inner, though perhaps invisible structure of an atomic particle. What the quotation made me think of, however, was the psychological syndrome known as MPD, or Multiple Personality Disorder. The excited states of an MPD personality are certainly indicative of an inner structure of personalities. Later in chromodynamics he explains the force between two quarks is at its weakest at close range and increases with growing distance. This seems like the "marriage force" to me. Not noticeable, until some separation occurs. From Wolfgang Pauli to Werner Heisenberg to Pope John Paul II, this physicist got along with the greatest men of this century and helped to create the atomic bomb and to keep it from ever being used again. Through it all he kept his sense of humor, remembering Bohr's admonition, "There are some things that are so serious you can only joke about them."