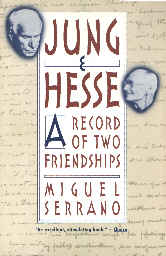 In a giant triangulation of the globe, Serrano, a Chilean, spends time in India and Switzerland. While India he studies Hesse & Jung and while in Switzerland he meets with them. This book records the friendship that developed between Serrano and these two giants of literature and psychology.

Hesse he finds to be the more peaceful of the two, and their conversations tend toward myths, symbols, and stories. The story of the metamorphosis of Piktor was the most notable of them. In Hesse he finds Demian, Siddharta, and the other characters of Hesse's novels incarnated. Serrano's friendship with Hesse is like meeting these characters in person. Serrano experiences Hesse like his story "Journey to the East" in which all the characters of Hesse's novels meet in one place.

When Serrano meets Jung, it is a master-student relationship: the aged master sharing with the avid student his thoughts in the twilight of his life. Jung he found to be restless, imbued with a constant striving that he had found absent in Hesse.

He tells a marvelous story about Jung and how he loved his pots and pans at Bollingen in the kitchen of the Tower. He talked to them and gave them names, those vessels he used to prepare food over a wooden fire in the handmade brick hearth.

He closes the book with this observation:

If I were to distinguish the two I would say that I had discovered more peace in Hesse than I did in Jung. Up until the last moment, Jung still seemed to be searching. Perhaps his was the road of the Magician who, unlike the Saint, did not yearn for fusion or for the peace of God, but preferred the eternal highway with all its unhappiness.

Thus he pegs Carl Gustav Jung as the peregrine, the eternal traveler ever searching for new worlds, ever young, ever Jung.