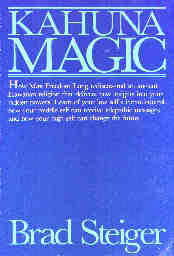 This is the second book on Huna healing I've read. The first was Kahuna Healing by Serge King, the son of a kahuna, and one himself. In Kahuna Healing I encountered the beautiful creation story of the Polynesian race in which extra-terrestrials from the Pleiades star system came to earth and designed the Polynesian language to embody the essence of their teachings on Huna healing and magic. The words HUNA, KA'A, HU'U, HU, NA, and UHANE are all anagrams of KAHUNA, and all their meanings illuminate the meaning of the word they are found within. KA (master) and HUNA (healing) means master of healing. The early missionaries interpreted the word KAHUNA as "priest."

Steiger compiles herein the research of Max Freedom Long (is he a cousin of Robert Heinlein's Lazarus Long?) into a readable book built on Steiger's own parapsychological understandings. If King's book was etymological, then Steiger's is philosophical. He studies the physical basis for understanding the Huna teachings and relates them, whenever possible, to electrical, electronic, and biomedical understandings of 20th Century science.

He gives a detailed explanation of the ten aspects of HUNA knowledge -- explaining along the way the scientific interpretations for religion's processes and rituals. The importance of HUNA knowledge to me is its basis for understanding many disparate fields of human interaction such as: healing, prayer, exercise, dance, poltergeist, ghosts, ECG's. And to understand them in process-oriented terminology: you do A and B and you get C, a recipe-based program for enlightenment. When the missionaries told the Hawaiians that if you believe in Jesus you will be healed, they were amazed to find that, if they did what the missionaries told them, it didn't work. By the time they found out that the promises of the missionaries were only occasionally, if at all, true, it was too late to go back to their native healers. They had been raised on a process-based religion that worked, and it had been replaced by a belief-based religion that had few process descriptions of how to achieve something.

The HUNA field deserves further study both because of it unfamiliar constructs and for its familiar constructs. The trinity of HUNA (Low, Middle, and High Self) may be the primeval trinity of all religions. The study of how the three selves interact seems to resemble the Id, Ego, and Superego of Freud. This book was the inspiration for THE KAHUNA's PRAYER (1), my adaption of the LORD'S PRAYER which incorporates my study of the HUNA knowledge:

You, who reside in us,
Your name is spoken
only in our hearts,
We recognize that what you wish,
materializes;
We ask of your bounty
that you wish for us:
<mention special intentions here>
Food for our body,
Forgiveness for others and
Love for all your creation.
MAHALO


1. from Flowers of Shanidar, reprinted with permission.