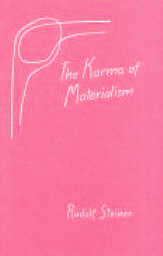 Published by Anthroposophic Press in 1985

This book begins with a waving off of the merely curious in the Foreword by Owen Barfield. Without a knowledge of the definitions of anthroposophical term, the reader will likely be inundated by unfamiliar words and obscure meanings. But, Barfield adds, for the intrepid, who will dash in anyway (from page XV):

The other way of twigging the meanings of unfamiliar words is to plunge into contexts wherein they occur more than once, and sometimes perhaps by way of casual reference, and thus gradually to approach nearer and nearer to them by experiencing their use in those contexts. Incidentally if this way were not a way that is wide open to us, we should never have learned to speak or to understand anything at all.

The table of contents has a precis of each chapter so I will only attempt here to outline the ideas important to me that I found in this book, usually preceded by a brief quote from Steiner to set the stage.

"Lucifer and Ahriman are identical with force and matter." One could re-write Newton's 2nd Law (force = mass x acceleration) as Lucifer = Ahriman x Acceleration. Or Einstein's famous equation (e=mc2) as either Lucifer = Ahriman x c2 or Energy = Ahriman x Lucifer2. In the first case, if we identify Lucifer with energy and Ahriman with mass then Lucifer becomes the external influences of Ahriman sped up to the speed of light squared. In the second case, we consider energy as having both an ahrimanic (matter or mass) aspect and a luciferian (light) aspect.

"The people must be condemned who brought death on someone without sin (Jesus), on the other hand if this death had not occurred Christianity would not exist." I call this the paradox of the Jews. To condemn them for an act and ignore the importance of the unconscious benefit they created can only be done by people who are unconscious of their own inner Self that performs for them acts they don't like that bring them unconscious benefits. Such is the realm of rainbows and shadows. The shadow is an act one doesn't like, and the rainbow the unexpected benefit that follows the shadow. As I've inscribed many times in copies of my book Rainbows & Shadows, "May every shadow in your life be followed by a beautiful rainbow."

"Yet at the moment the Mystery of Golgotha is enacted, Pilate, the representative of the strongest earthly power, proves a weakling when faced with spiritual power. He is incapable of coming to any insight or to make any decision about what is to happen." It is yet so today. Imagine an equivalent event coming to the Congress of the United States for decision. They would be as helpless as Pilate was in his day.

"Dimmed consciousness is for ahrimanic and luciferic beings the window or door through which they can enter the world and carry out their intention. They attack people when they are in a state of dimmed consciousness and take possession of them. Ahriman and Lucifer do not act in inexplicable terrifying ways but through human beings whose state of consciousness gives them access." This immediately brought back to my mind what Gertrude Stein said about the inevitability of the Second World War. She and Alice B. Toklas toured the countryside of France and Germany after the Great War and noticed how subdued the peasants were, a sure sign of dimmed consciousness. After the Second World War, the two friends toured the countryside and noticed how jubilant the same peasants were. This told them that the active warring over the whole of the European continent was over.

Academics disregard Martin Luther's "direct experience of the spiritual world and talk of the devil is seen [by them] as the weakness of a great man. But in truth the weakness lies in those who speak in this way about Luther." Luther was a man who straddled the fourth and fifth post Atlantean epochs. As a man of the fourth he could directly experience the spiritual world, as a man of the fifth epoch, he knew the time was coming when few men would have such direct experience. So he made the two dramatic pronouncements that 1) the Bible would be the sole source of spiritual knowledge and 2) faith would be the only way to Christ. Both of these pronouncements make new and better sense when one adds "from now on" to them and understands that the man saying them was talking as a man of the fourth epoch with direct spiritual knowledge to men of the coming fifth epoch who would likely have none.

"We should sense that the painful experiences we go through are in many respects the karma of materialism. We must have the will to rethink history. I have often pointed out that history as taught today in elementary and secondary schools as well as in universities, perhaps particularly in the latter, is a mere fable, and is all the more pernicious for being unaware that it is but a fable that aims to present only external physical events." No better description of the pitfalls and shortcomings of the study of a history with no view to the internal events, i. e., the evolution of consciousness. (R. G. Collingwood is the only historian I've found in my reading with such a view. "All history is the history of thought" is RGC's legacy to us.) We have reached the point in the evolution of consciousness where Darwinian evolution, with its precepts mired in external materialism, will be overshadowed by the Steinerian internal evolution of consciousness, from now on.