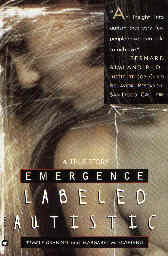 "Once autistic, always autistic” is the curse placed on autistic children by many well-meaning parents and professionals, even today. It was that curse that Temple Grandin fought so hard to escape, not by proving that she was wrongly labeled, but by proving with her life that autism is a correctable condition. Here's what she says about whether the characteristic behaviors of autism can be corrected:

However, I feel strongly that I am living proof that they can. And this seems to be especially true of autistic children who have meaningful language skills before the age of five.

Doyle Henderson theorizes that five is the age at which a child's physical body states are no longer stored due to the switch to the use of conceptual memory. (See Reviews on PANACEA! and Emotional Intelligence.) When a child passes this Memory Transition Age, it is no longer able to store for later recall any physical body states. Since speech is stored as a complex of physical body states, if a child does not begin speaking before five, they will have tremendous difficulty trying to speak normally later. People who learn a second language after the age of five speak the new language using the restricted set of phonemes of their native language which was learned before five years old.

Henderson also posits that autism is due to the precocious onset of conceptual memory, possibly due to some advanced capability in the autistic child's brain that provides visual processing capability years before the normal child has it. When a normal child begins its transition to the use of conceptual memory, a gradual process extending from age three to age five, the storage of novel physical body states becomes rarer and rarer until around five, no more are stored.

1.) Autistic children have a reduced nystagmus.

2.) Autistic children become fixated with spinning, among other things.

Seen in the light of Henderson's theory, the perseveration of the typical autistic child is likely due to its brain's attempt to store important physical body states while working against the impedance of its precocious conceptual memory capability.

An incident in Temple's life that occurred before five indicates her absence of fear responses and her precocious conceptual ability. Her mother told Temple to wear a hat for the trip to the speech therapist in the car. Temple tried to oblige, but felt like the hat was squashing her head, so she threw it out the window next to where her mother was driving. Her mother reached to catch the hat, swerved the car into the other lane and crashed into a truck. As the glass from the windshield showered over the normally speechless Temple, she began saying, "Ice. Ice. Ice." Temple reports, "I was not scared at all. It was kind of exciting." In the middle of a terrible automobile accident that nearly killed her mother and sister, Temple paid attention to the visual similarity of broken glass and ice. In addition, since no fear states had been stored due to her precocious conceptualization, she felt no fear.(2)

Temple says of her exceptional visual capability, "the scenes of my childhood are vivid. Memories play like a movie on the big screen of my mind."

On page 20 she quotes what Deborah Fein and her colleagues in Boston have to say on the cause of autism:

In animals autistic-like behavior may result from a lack of input, whereas in autistic children, it may result from failure to attend to input. Because of the very early onset, these children may be deprived of the perceptual experience that normally forms the building blocks of higher percepts, concepts and language.

Where does this "failure to attend to input" come from? Henderson's theory provides the answer: it is likely due to the precocious onset of conceptual memory capability. Instead of the physical body states it is being subjected to, the autistic child is attending to the visual (conceptual) aspects of the inputs. As a result the physical body states are not stored for later recall as in normal children. This explains why the autistic child would behave similar to animals that have been deprived of sensory inputs.

On page 29, Temple points out that autistic children prefer the proximal senses (K, O, G)(3) over the distal senses (A, V). She suggests that this may be due to "inadequate somatosensory stimulation". Henderson's theory suggests that the stimulation may have been adequate, but it simply wasn't attended to because the autistic child would have been busy conceptualizing and visualizing the episodes in which the stimulation was present. If the stimulation had occurred before the autistic child began its precocious conceptualization, it would have been stored. Thus the fixations on rocking, e. g., may be due to the child's re-creating one of the only physical body states that it experiences solely from memory. Since these primitive movements are the only feelings the child can experience, it repeats them over and over again.

There is evidence from autopsies of autistics that their brains are indistinguishable from non-autistic brains except for the brain stem which has smaller neurons with a higher packing density. The presence of more neurons indicates a greater processing capability, which may turn out to be the reason for the precocious onset of conceptual memory. Research will be necessary to determine if this is so, but it raises the possibility that autistic children may be mutations with advanced image processing capability — a mutation that occurs about once in every 2,000 live births.

By failing to treat these children as advanced members of the human race, we have relegated them mostly to institutionalized isolation, up until now. Temple Grandin's fine book, in conjunction with Doyle Henderson's theory of doyletics, offers us hope that we may learn to assimilate autistic children(4) into this society as happy and super-productive members from now on.

1. Henderson, in a private communication, told me the story of the autistic boy who was getting a shot and asked the doctor if he was going give him the shot in his heel like the other doctor. The doctor realized the boy was talking about his PKU shot which is given at infancy and asked, "How do you know it was in your heel?" "I remember it well," the boy said. The stress on well indicated he also remembered not liking it at all.
Return to text at footnote 1.

2. According to Henderson's theory, fear is the re-triggering of physical body states that were originally stored before the Memory Transition Age of five. If an autistic child such as Temple had experienced a fear state earlier, but had conceptualized the memory due to her precocious capability to do so, the fear state would NOT be available for later triggering. Thus Henderson's theory explains neatly why Temple did not feel fear from the accident.
Return to text at footnote 2.

3. Here I use the standard NLP symbols for the five senses: K - kinesthetic, A - Auditory, V - Visual, O - Olfactory, and G - Gustatory.
Return to text at footnote 3.

4. There are two movies coming out about Temple Grandin and her life and work. The first is an Icelandic filmmaker's work, "The Sunshine Boy" (2009), and the second is a 2010 release, 110-minute HBO documentary called "Temple Grandin".
Return to text at footnote 4.