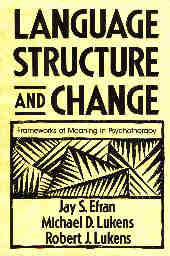 I first encountered these authors in an article they wrote in the "Family Therapy Networker" journal. The article was on Humberto Maturana's new paradigm/epistemology for therapists. I wrote a letter to the editor of the journal about the article pointing out how the authors, in talking about the new paradigm, used the method of languaging common to the old paradigm.

I thoroughly enjoyed the article "The World According to Humberto Maturana" by Jay Efran, Michael D. Lukens and Robert J. Lukens. The field of psychotherapy has for too long struggled with the antiquated cause-effect epistemology of Artistotle and Newton, labeled "metaphysical realism" by Paul Watzlawick. Maturana's work is the vanguard of the new paradigm of "radical constructivism", as clearly indicated by point five and six of his theory:

5.) Without the observer nothing exists.

6.) We do not perceive an objective universe. The objects we think we see and study are products of the activity of our own nervous system.

Very well said, although the reader may find it useful to re-read point 6.) In the first person singular to develop the maximum impact.

One of the major difficulties of entering a new paradigm is that we must talk of the new paradigm with the concepts and constructs of the old paradigm. When we study a new foreign language, we must use our native language until we are able to converse in the new language. When we build robots, we must use hand tools until we are able to use the robotic tools to build robots. Thus it was not surprising to find the following sentence in the Efran and Lukens article:

". . . it would be helpful if family therapists and other mental health workers stopped talking about 'reality testing' and spoke instead of 'consensus testing' which is more accurate."

"Reality testing" is the process of comparing the match of the system under test with a standard of reality. "Consensus testing" is the process of constructing a mutually agreed upon interpretation of reality for testing purposes. Thus, when one examines the phrase "which is more accurate" from the above quote, it becomes clear that the phrase is an example of "reality testing" in action.

How is that possible? When the authors use the phrase "which is more accurate", they are, in my view, comparing the match of the system under test (i. e., "consensus testing") a standard of reality. Webster's definition of "accurate" is "conforming exactly to a truth or a standard". Thus, the process of using the old paradigm of "reality testing" to describe the new paradigm of "consensus testing" is laid bare for all to see.

Do we have a consensus?

In this book they did a better job of languaging the new paradigm. After the first few chapters' discussions of "structure determinism" and Maturana's theories, however, they devoted the remainder of their book to the subtitle, "Frameworks of Meaning in Psychotherapy." The meat of the book is in the discussions of how the authors do their therapy using a medical model. They use a treatment plan, not based on fixed schedules of weekly visits for 6 months, but rather based on immediate help and further treatments as required by the individual. Thus a new client is sent home and asked to evaluate whether his or her life has improved in any way by the visit. If so, they are invited to call back for a followup session. If not, they are encouraged to consider seeing someone else.

This book would make excellent reading for beginners or veterans in private practice. The three authors share many stories of early training experiences and pitfalls to avoid in the practice of psychotherapy.

In their "frameworks of meaning" they include the fields of therapy of many innovators, such as Milton Erickson (they leave out the "c", confusing his name with Erik Eriksen's), Watzlawick, Bateson, Maturana, and David Reynolds. Conspicuously absent is the nascent field of Neuro-Linguistic Programming (NLP). In one chapter near the end of the book, they describe how an individual views a memory by seeing himself in the picture and viewing over his shoulder the scene. No NLP'er would ever describe such a scene without mentioning it as only one possible way of viewing the scene. But they are in the job of looking at life over people's shoulders and if you are in the same business you will enjoy joining them by looking at their life over their shoulders.