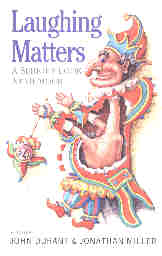 A collection of essays on humor (1) could be expected to be deathly boring, but this motley assortment of writers, researchers, editors, cartoonists and clowns provides abundant entertainment to enliven their insights into the etiology of humor.

Jonathan Miller's contribution to the humor section was his anecdote about the panel discussion skit on restoration of public utilities after Armageddon.

A political cartoonist spices up his essay with stories about editorial cartooning such as the question he is often asked, "Do you do the drawing and also write the captions for the cartoon?"

The Freudian analyst takes a heavy handed look at the roots of humor and throws out questions like, "Is humor our civilized equivalent of lethal responses?"

A film critic examines the comedy approach of Buster Keaton and remembers the film in which Keaton in the projector booth is mimicking the lovemaking actions of the couple on the screen: the kiss on the hand, up the arm, on the lips, etc., with his girl friend, when suddenly the scene is replaced with the couple sitting in a chair holding a couple of kids. At this point Keaton stares incredulously at the screen and at us. Something had happened that violated common sense and we had accepted it unquestioned. He shows us the violation, and we must laugh.

The essay on Left Hand and Right Hand disabilities details some original research in the origin of humor by using LHD and RHD patients and a process of joke completion. What is amazing is that the humor source is in neither the Left Brain nor the Right Brain. It is in the coordination of the two hemispheres that humor is made possible. The researchers found that lacking either hemisphere's contribution, only half of the joke was sensed, and the humor was therefore lost. The presence of the coherence half and the non-sequitur half simultaneously creates the possibility for humor. An LHD misses the coherence half of the joke (a Right Brain function) and an RHD misses the non-sequitur half or the punch line (a Left Brain function).

To people with these disabilities, humor is not a laughing matter.

To my friend, Jon, at http://www.insteadlaugh.com humor is not a laughing matter, but rather a serious albeit light-hearted attack on some rather ominous problems for some people: suicide, depression, and anxiety attacks.

1. Due to the British origin of this book, the word humour in the title has the British spelling, however, the American spelling humor is used in the body of this review.